Himachal Pradesh BJP MP Anurag Thakur raised in the Lok Sabha the issue of monkey menace and demanded lifting of the ban on their export for bio-medical research. 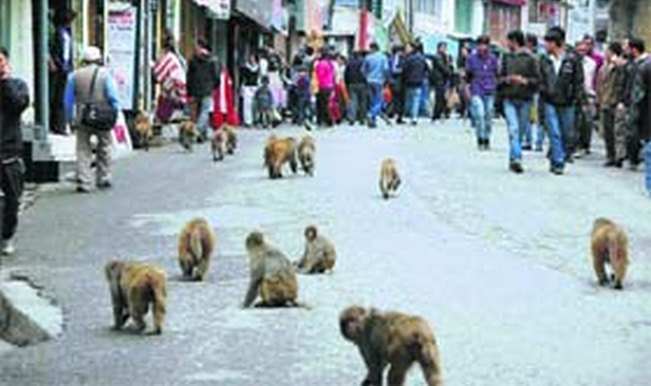 New Delhi/Shimla, Nov 25: Himachal Pradesh BJP MP Anurag Thakur Tuesday raised in the Lok Sabha the issue of monkey menace and demanded lifting of the ban on their export for bio-medical research. Thakur, MP from Hamirpur, said the farmers have been forced to abandon farming due to menace of the monkeys. He said the central government needed to revoke the ban on export of monkeys so that their population could be checked. Also Read - Monkey Steals Man’s iPhone While He Was Asleep, Takes Cute Selfies & Videos of The Jungle | Watch

Thakur said the monkeys often attack women and school-going children. He urged Environment and Forests Minister Prakash Javadekar to take necessary steps to amend the laws and provide a relief to the state. Also Read - Chandigarh Tattoo Artist Arrested For Keeping a Monkey in Captivity, Accused of Force-Feeding It Alcohol

Wildlife officials told IANS the monkey census of 2013 in Himachal Pradesh showed their population at 236,000. This, according to them, represented a decline from 319,000 in 2004. Also Read - Moderna's COVID-19 Vaccine Shows Great Result in Monkeys

The central government had banned the export of wild animals in 1978, said an official. However, thousands of farmers in Shimla, Solan, Sirmaur, Bilaspur, Hamirpur, Una, Mandi and Kangra districts claim they have incurred losses mainly due to the marauding monkeys. (ALSO SEE: After white tiger, monkeys kill woman in Shimla, bite girl)

The wildlife wing estimates that more than 900,000 farmers are affected by monkeys.

Coming down heavily on the state government, a division bench of Himachal Pradesh High Court Chief Justice Mansoor Ahmad Mir and Justice Tarlok Singh Chauhan Nov 12 observed that verbal orders have been passed from time to time but neither the state nor the union government has taken the requisite steps.