Continuous rains in the past few days have wreaked havoc in many parts of India. Heavy rains have led to floods in parts of Gujarat, Odisha, Assam.

Mumbai, July 18: Continuous rains in the past few days have wreaked havoc in many parts of India. Heavy rains have led to floods in parts of Gujarat, Odisha, Assam, and a flood-like situation in Andhra Pradesh. In Odisha, floods in various districts have left many people homeless and more rains are expected in these areas. Uttarakhand has been put on a high alert and the rise in water level in the rivers of Uttar Pradesh has led to these crossing the danger mark. The Indian Meteorological Department has predicted heavy rains in these states for the next few days. Also Read - International Flights: Here Are 7 Foreign Airlines That Have Resumed Air Travel Amid COVID-19

Heavy downpour in Gujarat led to waterlogging and floods in many places such as Bilimora, Jamnagar, Valsad, Kandla, reports ANI. Heavy to very heavy showers have been predicted in the state over the next few days. Due to constant rainfall, the train services in Gujarat have been affected badly. Many trains are facing delays due to waterlogged railway tracks. Also Read - Unlock 3 in Mumbai: Malls to Open From August 5, No Odd-even Rule For Shops, Says BMC in Its SOP 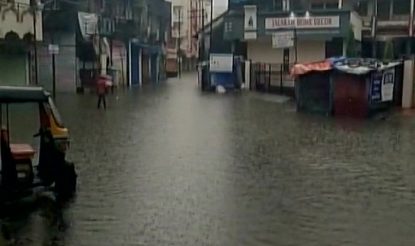 In Navsari’s Bilimora, water has entered several houses. Due to excessive flooding in Jamnagar district, relief operations are on to rescue people. The  State Emergency Operations Centre (SEOC) informed that at least 11 people have died across the state in the past 24 hours. Around 400 people were rescued by the National Disaster Response Force and the Indian Air Force as heavy rains pounded many parts of Gujarat on Friday and Saturday. 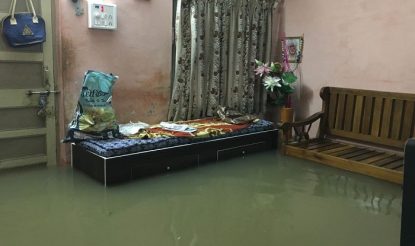 Water enters in house in Gujarat

In Maharashtra, Mumbai has been receiving continuous rainfall since Friday. The heavy showers in the city disrupted the local train services and affected traffic to a large extent. Due to non-stop downpour in Mumbai, waterlogging was reported in places like Matunga, Sion, Kings Circle, Malad. The weathermen have predicted heavy rainfall in Mumbai for the next 48 hours. Normal life has been disrupted following incessant and heavy rains in Bhiwandi region. Parts of Konkan, Vidarbha, and Marathwada in the state received a good amount of rainfall in the past 24 hours. (ALSO READ: Mumbai: Monday Records Highest Rainfall in July so Far; Celebs Take Local Trains to Avoid Jams) 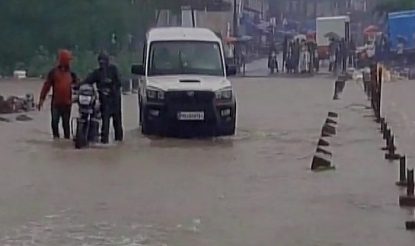 Railway bridge washed away in Odisha

After a red alert in Odisha, the situation in the state is only worsening. Due to heavy rainfall, railway bridge in Rayagada district was washed away. Due to this, train service remains affected between Rayagada-Titlagarh section. Several areas were inundated in major parts of Kandahar districts. With the uncontrollable rains and flooding in Rayagada, people have been forced to leave their houses and have been deprived of food. 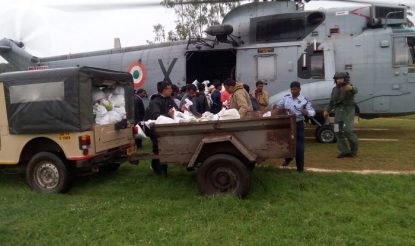 Four helicopters of the Indian Air Force have been engaged in relief work in Rayagada. They air dropped food packets to people hit by floods in this region. The Skymet Weather Forecast has predicted vigorous rainfall in parts of Odisha for the next 24 hours. At least one person was dead and thousands of people have been left marooned in Kandahar and Ragayada regions of Odisha due to floods. The district administration declared three-day holiday for school in the Kalyansinghpur block of Rayagada region following heavy floods. 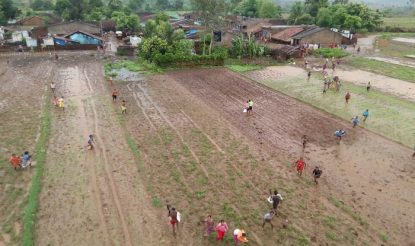 Due to heavy rains in Odisha, the water level in Nagavali river, which crisscrosses through Vizianagaram and Srikakulam districts of north coastal Andhra Pradesh, increased. This raised a flash flood situation in the Coastal Andhra Pradesh. This also damaged the crops in the surrounding districts and affected the train services between Andhra and Odisha. 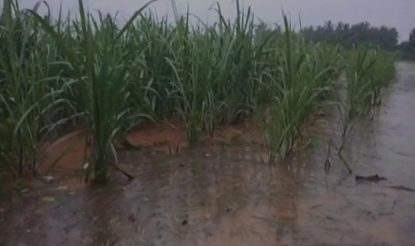 Crops damaged because of heavy rains in Andhra Pradesh

The incessant rainfall in Srikakulam district of Andhra Pradesh created a flood like situation in the villages Narayanapuram, Annavaram, Kollivalasa. Water has entered a village and a school complex and also damaged many sugar cane crops in the districts. The weathermen predicted extremely heavy rains in Andhra Pradesh for the next 24 hours. 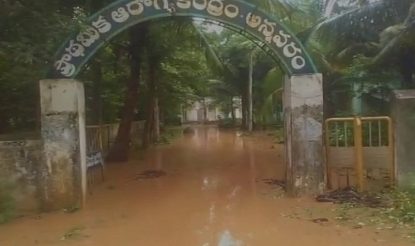 In Telangana, the intensity of rains is more compared to Andhra Pradesh. The water level in Hussain Sagar lake rose due to heavy rains in Hyderabad. The traffic in Hyderabad has been completely disrupted due to continuous showers and has led to long-hour jams. The weather forecast predicts an increase in rainfall in the state and light to moderate rains with one or two heavy spells in a few parts. 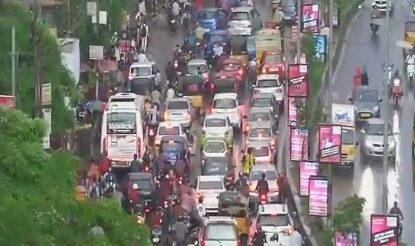 60 dead, lakhs affected due to floods in Assam

Heavy to very heavy rains have been predicted in Assam along with the adjoining states Manipur, Mizoram, and Tripura.

Uttarakhand received decent to good rainfall in the past few days. As reported by ANI, the Uttarakhand Met Department has issued heavy rain alert in some parts of Uttarkashi, Dehradun, Chamoli, Rudraprayag, Bageshwar for the next 24 hours.

Uttar Pradesh received moderate and continuous rainfall in several parts. Due to incessant showers, major rivers of the state including the Ganga, the Sharda and the Ghaghra were flowing close to the danger mark. The weather forecast has predicted moderate to heavy rainfall in the state for next few more days. 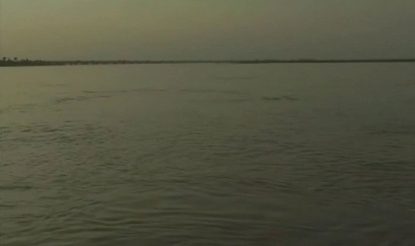 Rise in water level of a lake in UP

In Himachal Pradesh, heavy rainfall lashed many parts of the state. Due to a cloud burst in Chama district, a man was swept away by flash floods that were triggered. The state will receive more heavy rainfall, predicted the weather department.

With monsoon at its peak, most parts of the country continue to experience moderate to heavy rainfall. Stay with India.com for more updates on the monsoon.