An important provision of the amendment bill is that it has introduced penalty for 'not providing way for emergency vehicles' and has listed it as a traffic offence.

New Delhi, April 10: The Lok Sabha on Monday passed the draft legislation to amend the Motor Vehicles Act, 1988. The passed bill,  Motor Vehicles (Amendment) Bill 2016 will focus more on penalising violators and will protect the good samaritans from legal hassles. The amendment bill mainly looks into the issues of insurance, and has proposed huge penalties for traffic offences, punishment for guardians whose minors are caught driving or is involved in any accident and also increase in the compensation for the families of road accident victims. Also Read - Riding Without Helmet in Karnataka to Now Cost Three-Month Suspension of Driving Licence | All You Need to Know

Additionally, the bill addresses issues like third party insurance, road safety and regulation of taxi aggregators. It provides for a Motor Vehicle Accident Fund, which would reportedly provide compulsory insurance cover to all users of roads in case of a few certain types of accidents. Moreover, the bill amends the maximum liability for third party insurance. Also Read - PM Narendra Modi Gets Slightly Richer, HM Amit Shah Poorer As Per Assets Declaration

Previously, under the 1988 Act, the liability of the third party insurer for motor vehicle accidents was unlimited but the new Bill limits it to Rs 10 lakh in case of death and five lakh rupees in case of severe injury. Also Read - New Motor Vehicle Rules From Today: From Maintenance of Documents to E-challans Through IT Portal, Know All Amendments Here

New provisions have been proposed in the bill in order to deliver efficient service and keeping the idea of E-Governance in mind,and it includes online learning licenses and increasing the validity period for driving licenses. The bill also does away with the educational qualification requirements for acquiring a driving license.

The most important trait of the amended bill is that it proposes that even if a juvenile commits any traffic offence, the guardian or owner shall be responsible and will be deemed guilty. However, the juvenile will be tried under the Juvenile Justice Act. Moreover, the registration of any such vehicle will be cancelled. 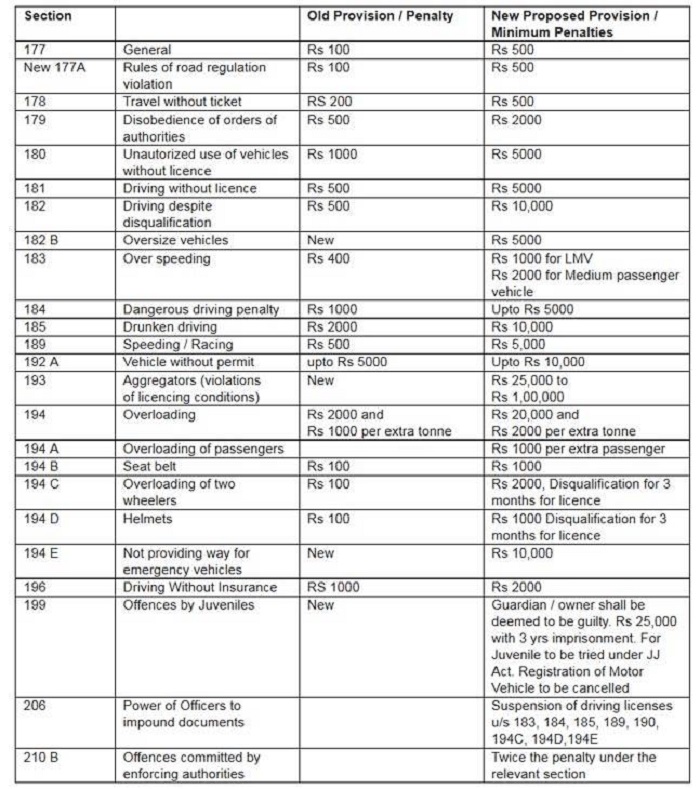 When it comes to certification of automobiles, the Bill states that the process for testing and certification for automobiles will be regulated more effectively and the new amendment claims that testing agencies, which issue automobile approvals have been brought under the scope of the Motor Vehicle Act.

Another important provision of the amendment bill is that it has introduced penalty for ‘not providing way for emergency vehicles’ and as per the official announcement any violator of this provision will be charged with a fine of Rs. 10,000.

In order to facilitate transport solution for specially-abled people, the bottlenecks have been removed in respect of grant of driving licenses and has proposed alterations in vehicles to make it appropriate for their use. Apart from that, to smoothen the process of registration and licensing, it has been proposed to create a National Register for Driving Licence and a National Register for Vehicle registration through “Vahan” and “Sarathi” platforms.

It was August 2016 that the bill was first introduced in the Lok Sabha. It was referred to a parliamentary standing committee and it was their suggestions which has been endorsed by the Union Cabinet. The changes in the Motor vehicle Amendment Bill 2016, were approved by the Union cabinet on March 31.