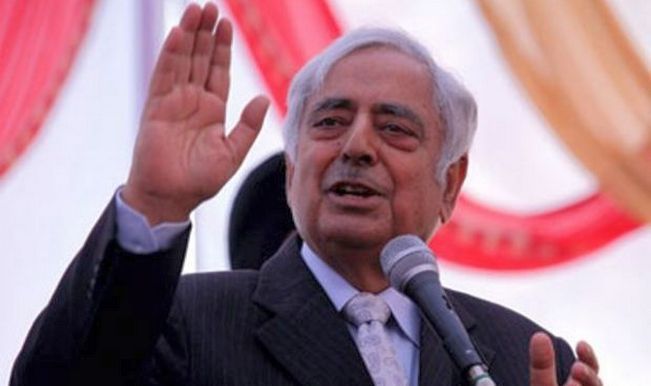 After taking oath, Sayeed, 79, warmly hugged Modi and sat close to him, witnessing the entire ceremony held on a flower-decked stage at the Jammu University’s General Zorawar Singh auditorium. Son of a religious preacher from the Kashmir Valley, Sayeed will head the government of his Peoples Democratic Party and the Bharatiya Janata Party, and will be the chief minister for all of six years. Also Read - DDC Election in Jammu And Kashmir: 52% Voter Turnout in First Round of Eight-Phase Polls

Senior BJP leader Nirmal Singh was sworn in as the deputy chief minister. Former separatist leader Sajad Gani Lone took oath as a BJP ally, and then warmly hugged both Modi and Sayeed, triggering thunderous applause. His inclusion in the cabinet followed a last-minute hitch, a BJP source told IANS, without giving details.

Inclusive of the chief minister, the PDP will have 11 cabinet berths and the BJP six, including Lone. The PDP and BJP have three and five junior ministers respectively. Two women were named junior ministers: Priya Sethi (BJP) and Asiya Naqash (PDP).

This is the second time Sayeed will head a coalition government in Jammu and Kashmir. He took power in 2002, heading a PDP-Congress alliance, for a three-year term. The Kashmir verdict brought about a clear divide between the Muslim-majority Kashmir Valley and the Hindu-dominated Jammu region, with the PDP winning almost all its seats in the valley and the BJP sweeping Jammu.

Even as it became clear that the BJP and the PDP would have to team up to form a government, their negotiations became protracted because of the two parties’ known differences over some vital issues. This is the first time the BJP is tasting power in Jammu and Kashmir, the country’s only Muslim-majority state where a separatist campaign which has raged since 1989 has left thousands dead.