Many families, including children and women, are feared to be trapped. However, no casualties or injuries have been reported as of yet.

Mumbai, Aug 31: Sixteen persons were killed on Thursday as a five-storey building collapsed in Dongri area of South Mumbai. As per the latest reports, the incident happened at JJ Junction on Pakmodia street around 8.30 am where over 30 persons are feared trapped under the debris of the building. 10 fire tenders have been rushed to the spot to carry out the rescue operations. Two floors of the 70-year-old building were constructed illegally, a report claims. (ALSO READ: Death Toll in August 29 Mumbai Rains Rises to 17, Search on For Those Missing)Also Read - Mumbai Local Train: Good News For Students, They Can Use Suburban Trains From Today

The incident comes two days after a person died and two others were left injured as a building collapsed in Vasha Nagar area in Vikhroli at a time when incessant rains were wreaking havoc in Mumbai. Also Read - Aryan Khan Arrest: Gauri Khan Instructs Mannat Staff To Not Cook Sweets, Here's Why

03:16 pm: Maharashtra Housing Minister Prakash Mehta while speaking to Zee News said that strict action will be taken against those found guilty. Meanwhile, the rescue operation is still on.

02:23 pm: The death toll rises to 15 in the Bhendi Bazar building collapse whereas, BMC Mayor blames MHADA for the incident. He said, “It was a MHADA (Maharashtra Housing and Area Development Authority) building, they are responsible.”

12:46 pm: Reports say that the death toll in the incident of building collapse at Bhendi Bazar in Mumbai has increased to 10. It is also informed that 15 including 2 fire officers have been injured whereas, 25 persons have been rescued.

12:32 pm: As per the latest information by news agency ANI, the death toll in the building collapse in Mumbai has risen to eight. The report also claims that 14 persons are said to be injured.

11:55 am: The death toll in the Mumbai building collapse rose to seven on Thursday. According to reports, a total of 17 persons have been rescued out of which seven are said to be critical. Meanwhile, NCP leader Majid Memon has accused BMC of corruption which led to the incident.

11:35 am: NDRF Deputy Commandant Mahesh Nalawade while speaking to Zee News said that the rescue operation is underway. “We are trying to pull out the trapped persons from the debris,” he reportedly said. The report also claimed that a 45-member NDRF team is on the spot apart from the Mumbai police.

11:25 am: According to an eye-witness, Farida, there was a sweet shop on the ground flood of the building. She also informed Zee News, that those who were residing on the fifth floor of the building are safe.

11:18 am: As per Zee News, there was a play school on the first floor of the building. It was to start at 9 am. Notably, the building collapsed around 8.30 am. Meanwhile, the death toll in the incident has increased to five and the rescue operation is still on.

11:04 am: In yet another development, total 12 persons have been rescued out of which 5 are critically injured in Bhendi Bazar building collapse incident. Notably, the rescue operations are still underway.

11:00 am: The building reportedly collapsed on houses near it leaving them damaged. The incident happened near JJ flyover in Dongri.

10.49 am: News agency ANI says that three persons have been killed in the building collapse in Dongri whereas, nine persons are said to be injured out of which three are critical.

10.42 am: Three killed in Mumbai building collapse, 12 injured rushed to JJ Hospital, Fire department sources have been quoted as saying by Press Trust of India.

10: 15 am: Rescue operations are underway in the area. The NDRF team, ambulance and the fire tenders are present on the spot. 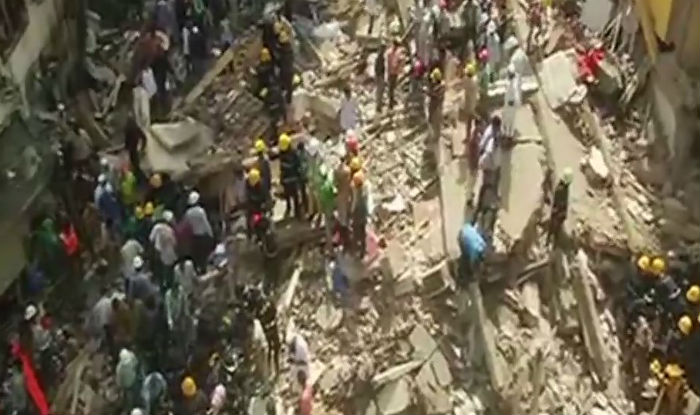 9:50 am: DCP Zone 1 Dr Manoj Sharma has been quoted as saying by news agency ANI, which claims it was a three-storey building, that three persons have been rescued from debris and the rescue team is looking for other survivors. He also informed that the number of trapped people is not confirmed yet.

Many families, including children and women, are feared to be trapped. However, no casualties or injuries have been reported as of yet. The reason of the building collapse is not clear. NDRF team has reached the spot.

Notably, Mumbai has been receiving incessant downpour since a couple of days now. On Tuesday, the maximum city recorded 297.6mm rain in 9 hours (8:30am-5:30pm), higher than any 24-hour rain in August in a decade.

Earlier on Saturday, a part of a building collapsed in Chandivli when it was being demolished. Two persons were reportedly killed in the incident. As per the locals, the collapse occurred at nearly 5:15 PM in the evening, when nearly 4 cranes were deployed by the BMC for bringing down the structure.

In 2013, 74 persons, including 18 children, 23 women and 33 men, had died in the worst building collpase in Thane, Mumbai. Reportedly, the building was under-construction.