The images are poignant and speak volumes of the ecological crisis staring at our face - the ongoing 'Else All Will be Still' exhibition by well known environmentalist and photographer Ravi Agarwal is a wake-up call for the society.

New Delhi, April 9 :  The images are poignant and speak volumes of the ecological crisis staring at our face – the ongoing ‘Else All Will be Still’ exhibition by well known environmentalist and photographer Ravi Agarwal is a wake-up call for the society. (Read: M F Husain turns 100, Husain 100 to pay tribute)Also Read - Shravan 2021: Sand Artist Creates 108 Colourful Shiva Lingams in Pushkar

The month-long solo exhibition, a collection of photographs and videos is on at the Gallery Espace. For Agarwal, it all started with his stay at Pondicherry with fishermen two years ago. Though he has done innumerable work on ecological issues, especially on the Yamuna river, engaging with the sea and fishermen was a life-changing experience for Agarwal, the founder of city-based NGO Toxics Link. Also Read - Artist Zohaib Khan Designs Beautiful Charcoal Portrait as a Tribute to Late Dilip Kumar

“The show is based on my experience in the fishing village near Pondicherry where fishermen friends helped me navigate new waters, which gave me an insight on what’s happening in the coastal line.. It led me further to explore about the politics of ecology and how people look at nature,” Agarwal told IANS. Also Read - 'Desh Jeetega, Corona Harega': Jodhpur Man Weaves Cots With Messages to Raise Awareness About Covid 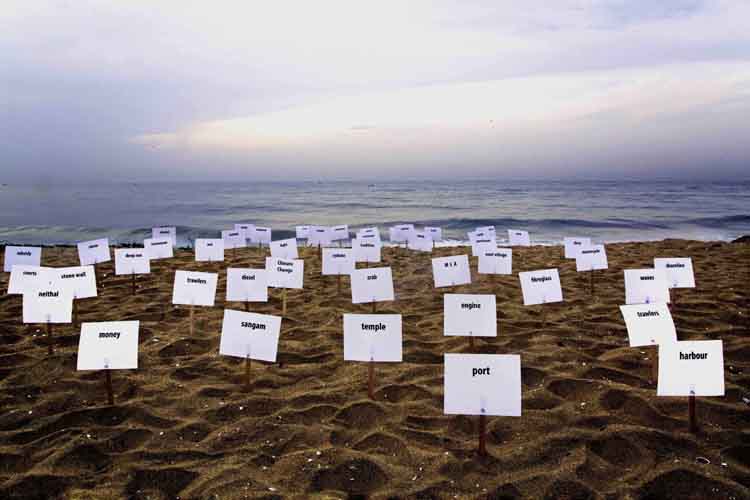 His encounter with the vast sea and fishermen threw up many pertinent questions such as the unequal power equations and the sustainability of the community.

The community’s intense relationship with the sea is beautifully captured in one of the photographs titled ‘Rhisome’ where placards are put up in a beach against the backdrop of a tranquil evening sea . The placards have words like cyclone, crab, engine, sangam, diesel, trawlers and more – words used by the fishermen to communicate about the sea, Agarwal said.

“These are the words used by the fishermens’ community to describe sea. They never use the words ‘nature’ or ‘beautiful’ . They have a direct relationship with the sea and it is a part of their life. On the other hand, I, as an outsider think of the sea as ‘nature’ or as beautiful. This work comes from the new philosophical idea that ‘nature’ is a construct and it does not really exist in that form.,” explained Agarwal.

The series titled “Ecological Manifesto” takes us back to the 2,000-year-old catamarans used by Tamil Nadu fishermen and made out of six long and three short pieces of wood. The image of a floating catamaran reminds us the fact that fishing is dying as a livelihood, and becoming more of a business.

“The word catamaran comes from Tamil (Kattu maran or tied wood). The images have a floating catamaran, and are inscribed with text from my diary,” said Agarwal, who had organised the public art festival ‘Yamuna Elbe project’ in Delhi in 2011.

So, it was quite natural that Agarwal turned to ancient Sangam poetry to lend the meaning of his experience with the sea. ” For me, Sangam poetry was a cultural imagination of poetry. It is written between 300 B.C. and 300 A.D and most of it is lost today. It’s a love poetry and in this, the outside became inside as object and subject co-formed each other,” he said.

Then there is ‘Engines: 20km’, a set of 20 photos on the distance a fishing boat can travel with an engine. The photograph describes the huge class divide where poor fishermen are marginalised and are increasingly slipping into despair whereas the rich use motorised boats.

‘Else, All Will Be Still’, is on at Gallery Espace, 16, Community Centre till May 14