Actor-turned-producer, Nakuul Mehta, teams up with Alekh Sangal and Ajay Singh to bring you a hilarious new web show!

[Photo Source: Screenshot via YouTube] Also Read - Your March Guide to Netflix: All The Movies And Web-Series Releasing This Month

If you haven’t seen the first episode of Nakuul Mehta’s latest creation, “I Don’t Watch TV,” you are missing out on life. I have only two words for this new web show—sheer brilliance! Also Read - Top 5 IMDb Rated Netflix Web Series to Add Into Your Watch List Today | Watch Video

Arre presents this hilarious new web series on their YouTube channel. The show is produced by Timbuktu Films—Nakuul Mehta’s production house—along with Alekh Sangal and Ajay Singh, who also wrote and directed the show. The trio has conceptualized and created this show together from scratch using their own television journey’s—and that of their close friends—as inspiration. Also Read - Nakuul Mehta- Jankee Welcome Baby Boy, Share First Photo of Them Holding Tiny Hand

The premise of the show is that it depicts the “real” life of India’s most loved television stars and works to debunk the false beliefs surrounding the fabulous life of these television actors. The first episode alone points out all the hardships of the life of a television actor, from not getting paid enough to the long hours, little breaks, fake friendships and extreme competition to find work. The actors take on cliched lines like “I have some projects in the pipeline” to “I’m just waiting for the right project”—and divulge the reality of what they really mean.

Episode 1 is titled “Inglorious Constipated Basturds,” a clever play on words, as they start their story by explaining that an actor has bowel movement problems for only two reasons—either they are working too many long hours or not at all. The show opens with Nakuul Mehta, aka Nox, literally losing his shit stressing over work. Next, we meet Al Pacino-obsessed Alekh Sangal, who is on a date where the lovely lady sitting across from him snapping selfies is more interested in his uber sexy friend, actor Vivian D’sena, than him. Lastly, we meet Ram Menon, aka RK the writer, who shows us that a writer is, unfortunately, the one who gets screwed at all times. 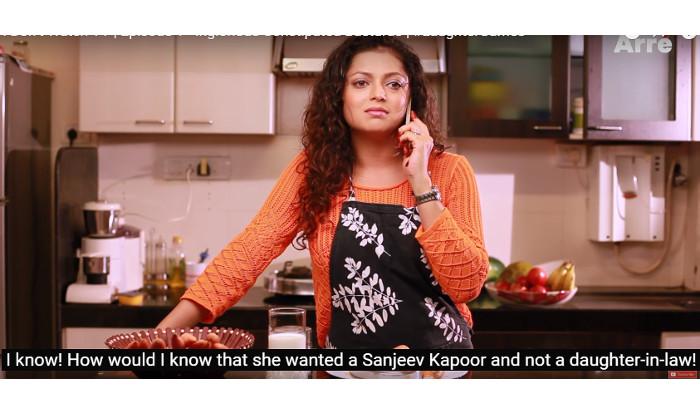 The show is set to feature numerous familiar and loved faces from not just television but also casting directors, directors and more. In episode 1 alone, we see Rithivik Dhanjani, Karan Patel, and Drashti Dhami. Dhanjani is hilarious as usual and Patel brings his angry young man persona to the show. Dhami is a delightful surprise as she reveals that the perfect bahu’s of the telly world are definitely not perfect bahu‘s in the real world. We also hear that Mukesh Chhabra, Anurag Kashyap and Rajiv Masand are all set to make guest appearances in later episodes.

The series is brilliantly written and each of the three leads—Mehta, Sangal and Menon—effortlessly plays their parts. The casual language used, the expletives dropped here and there, and the realistic situations all bring a raw element to the series that viewers will love. From the actors’ bowel movement issues to side monologues they have with the viewers—you will most definitely be laughing out loud for the entire 19 minutes of the show.

It’s funny, edgy, satirical and “Pyaar Ka Dard’s” lovable “Adi”  is still just as down-to-earth and lovable. The series felt less like a scripted show and more like reality show—not like the fully scripted “reality shows” we see today but an actual reality show. Comic timing, expressions, mannerisms, each actor truly showed an ease on screen that was completely natural. It is clear that the multi-talented producers of the show have thought out every detail—down to the toilet paper with Nakuul Mehta’s face on it!

I couldn’t let my favorite television star get away without answering a few questions on the show for me. When asked how they cast the show, Mehta said that it was mostly other friends in the industry who supported the project.

“We would have honestly liked to get everybody on to our show but we had to go with some close friends who were more than happy to back us, and some very talented TV stars who fit the part with their edgy personalities and fantastic acting chops,” Mehta responded. “We did not limit ourselves to TV but went after every artiste our story demanded.”

So what does he plan to do with this groundbreaking new show?

“We are hoping to bring out a fresh new Web series which has its own language and is not just a cooler television show or a cheaper movie experience,” Mehta explained. “We feel the Web has its own language and want to be the first to create it. We also want our content to have unique visuals and treatment unlike what we are used to watching in the digital domain.”

The final verdict: The show unveils some serious knowledge  in just one episode—television actors are real people too! They get constipated, face unemployment, work in uncomfortable situations, do things they hate and even fart.

By the way, can you believe Mehta spent all of episode 1 sitting on a toilet—and I still can’t stop raving about the show? Clearly, it’s that good!