Prime Minister Narendra Modi arrived here tonight enroute to a five-day high-profile visit to the US during which he will address the UN General Assembly, hold talks with President Barack Obama 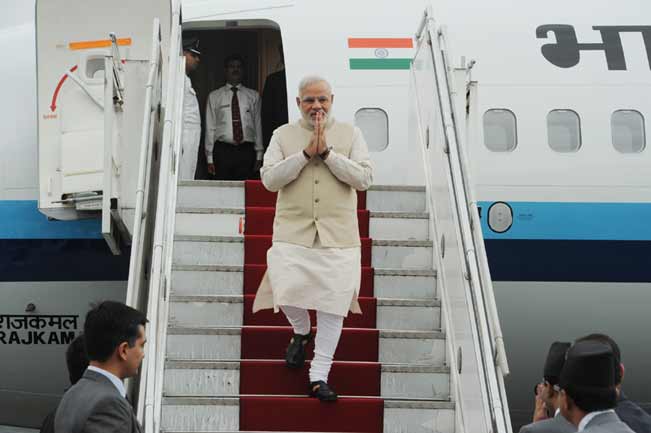 Frankfurt (Germany), Sep 25: Prime Minister Narendra Modi arrived here tonight en route a five-day high-profile visit to the US during which he will address the UN General Assembly, hold talks with President Barack Obama and meet top American corporate honchos besides series of other engagements. Modi will spend the night here and will leave tomorrow morning for New York where he will have a gruelling schedule including a rally at the famous Madison Square Garden on Sunday which is likely to be attended by around 20,000 people from Indian-American community. Also Read - Rare Pic: PM Modi Once Went Paragliding in Himachal's Solang Valley, Instructor Recalls The Day

In New York, Modi will deliver his maiden address at the at the 69th session of the UN General Assembly on Saturday. Obama will host a rare private dinner for Modi at the White House on September 29, so as to establish a personal relationship with the Indian leader ahead of summit talks the next day. The two leaders are meeting for the first time. The Prime Minister said he will discuss with Obama how Indo-US ties can be taken to a “new level” in the interest of the two countries as well as of the world. Also Read - ‘Centre's Farm Bills Will Only Help Hoarders’: Mamata Says Will Take Steps For Interest of Farmers

In a pre-departure statement in New Delhi, Modi said he will call for a stronger global commitment and more concerted multilateral action in addressing challenges of fragile global economy, turbulence and tension in many parts of the world, growth and spread of terrorism in his address at the UN. Modi would be meeting as many as 11 top corporate honchos over breakfast on September 29 apart from one-on-one meetings with six more business captains same day in New York.

In New York, Modi will pay a visit to the 9/11 memorial on Saturday following which he is expected to drive down to the United Nations headquarters to address the 69th annual session of UN General Assembly. He would also meet UN General Secretary Ban Ki-moon.

Modi will also be participating in a business meet, to be organised by the USIBC, expected to be attended by 300-400 businessmen in Washington on September 30.