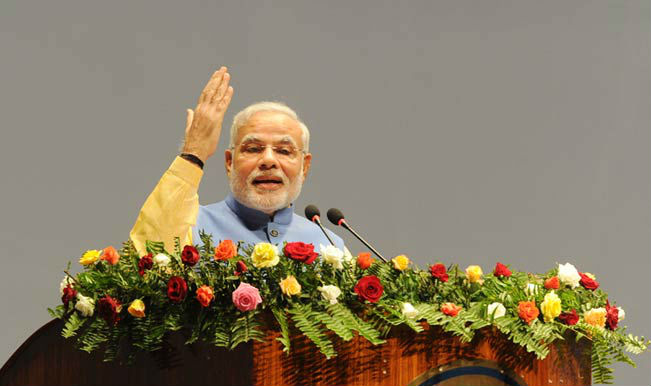 He added that more than the weapons the potential lies with the one who carries it. Recalling the sacrifices of the police officers after independence, the Prime Minister said, “My gratitude to all those police officers who are serving the nation. After Independence many police officers sacrificed their lives for the nation, and this sacrifice should be known.” Also Read - Give Concrete Solutions, Not Plain Speeches: Congress Slams PM Modi Over His Address to Nation

He summarized the speech by saying that the police should be SMART. “Police should be SMART which means, S-Sensitive and Strict, M-Modern and Mobile, A-Alert and Accountable, R-Responsive and Reliable, and T-Techno savvy and Trained,” the Prime Minister added. Earlier today, Prime Minister Narendra Modi was given the Guard of honor when he arrived at the venue to address DGP/IGPs conference.

Central Bureau of Investigation (CBI) Director Ranjit Sinha was also present at the conference. Prime Minister Modi, who is on a three-day visit to the north-eastern states of Assam, Manipur, Tripura and Nagaland, had yesterday, flagged-off the first train from Mendipathar, Meghalaya, to Guwahati and unveiled the plaque for a new rail line from Bhairabi to Sairang.

He had also inaugurated the platinum jubilee celebration of ‘The Assam Tribune’, a leading newspaper of the region. He had further expressed his government’s commitment to realise the potential of the north-east and to accelerate its progress. In a series of tweets issued ahead of his visit, he had said that he was eagerly looking forward to being there and interacting with the people.