Narendra Modi degree row: Another ploy of Arvind Kejriwal or is there an ambiguity over PM’s educational qualifications?

Modi's website used to propagate how he topped the University while pursuing MA. But after Delhi MLA Jitendra Tomar was convicted in fake degree case, the website deleted every portion which mentioned about the Master's degree. Is there a foul play?

Delhi Chief Minister Arvind Kejriwal has positioned himself into yet another square-off with Prime Minister Narendra Modi. Somehow, the Aam Aadmi Party (AAP) supremo makes sure that the spotlight remains at him. The latest strategy adopted by Kejriwal is to raise questions at Modi’s educational qualifications. This would serve two goals for the regional party – divert people’s attention from a failed Odd-Even round 2 and provide him some real space in the media rather than paid advertorials. Is this yet another ploy of India’s self-certified “most honest” politician?
Also Read - Will Actor Mithun Chakraborty Join BJP? His Plan to Share Stage With PM Modi at Bengal Rally Creates Speculation

This ‘shoot and scoot’ strategy of Kejriwal has proved to be successful for him on various occasions. Are the doubts raised against Prime Minister’s educational qualification baseless? Or is there ambiguity surrounding his qualifications? Did Modi furnish a fake degree before the Election Commission? Here we attempt to answer some of the queries. Also Read - PM Modi Discusses Production Linked Incentive Scheme With India Inc | Key Points

As per the information provided by Modi in his poll affidavits, he has received formal education till Class 10th (SSC). Later, he completed Bachelor in Arts through Delhi University in 1978. Later, he pursued post graduation in Arts from Gujarat University and completed it in 1983. Therefore, on paper, Modi has done both BA and MA. In the video below, Modi speaks about his educational qualifications and the hardship he went through to get himself educated. He also claims that he topped Gujarat University during his MA course.

How did the controversy originate?

When Modi began propagating the chaiwala gimmick, several RTI activists began ascertaining his exact educational qualifications. Information could not be sought from Delhi University, whereas, the Gujarat University straightaway rejected RTI applications, concerning the details of Narendra Modi. The most recently rejected RTI plea is of September 2015, when an Ahmedabad-based activist filed a plea before Gujarat university demanding the details of all those students who were enrolled for MA course between the years 1981 to 1984. However, the University denied furnishing the details.

In August 2015, the Prime Minister’s Office rejected the RTI plea of the Ahmedabad activist who demanded the copy of Modi’s MA degree. Subsequently, a campaign was launched on social media demanding Modi to clarify his stand and come out with the truth. Electorates do not doubt the capability of their Prime Minister, but are skeptical on whether he faked an education degree to project himself as highly educated. Most of the people were surprised by the stubborn stand taken by PMO. “Why are they surprising facts? PM Modi doesn’t have a degree or is he too embarrassed to show his marks after claiming that he topped the Gujarat University?” questioned one Gujarat-based RTI activist.

We hv no issue in having a uneducated PM if he is capable. Issue is whn he fakes it & say he is Univ topper & a PG. #DegreeDikhaoPMSaab

Not having a degree doesn’t make anyone a criminal but faking does. That’s why #DegreeDikhaoPMSaab — Dr Rakesh Parikh (@drrakeshparikh) August 8, 2015

Why cant PM show his education qualifications ? What is their to hide ? Marks ? #DegreeDikhaoPMSaab — नवेन्दु (@NavenduSingh_) August 8, 2015

In June 2015, Kejriwal faced an embarrassment after one of his then cabinet minister Jitendra Singh Tomar was chargesheeted by Delhi Police for disclosing a fake LLB degree before the Election Commission. However, in a face-saving act, Kejriwal expelled the leader not only from the Assembly, but from his party as well. Soon, he envisaged a strategy to convert this embarrassment into advantage. As the research team of AAP began hunting ‘Jitendra Tomars’ among the BJP, they found a stinging evidence against the Prime Minister. Modi’s website, which proudly claimed how Modi topped the Gujarat University, had now deleted the points. The lines which stated that Modi had completed his MA from Gujarat University was also deleted. Was this the fallout of ‘Jitendra Tomar’ incident?

Here is what the website said about PM’s qualifications in March 2015: 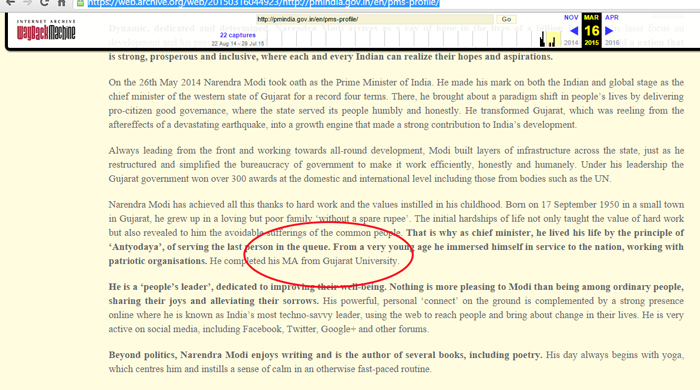 And after the Jitendra Tomar controversy, the website edited all portions which spoke about the MA degree of Narendra Modi:

With the CIC now instructing PMO, Delhi University and Gujarat University to release all available information, there is an inch of hope that this mystery surrounding the Modi’s educational qualifications would finally be settled. Would the correct information be finally placed in the public domain?