Narendra Modi in Jammu and kashmir: Will bring back Bollywood to Kashmir

"I have to bring back Bollywood to Kashmir," said Modi while addressing a BJP rally in this Jammu and Kashmir town 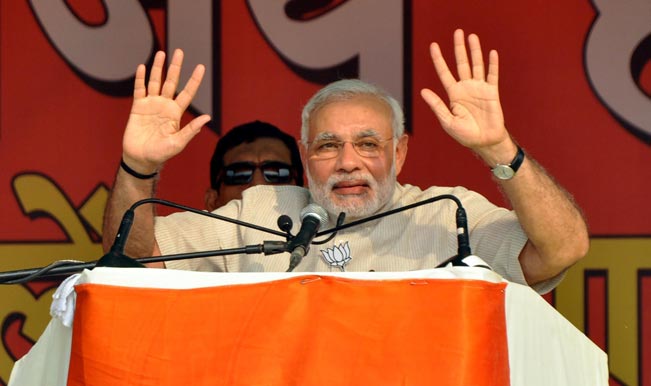 Kishtwar (Jammu and Kashmir), Nov 22: Prime Minister Narendra Modi Saturday promised to bring back “Bollywood to Kashmir”. “I have to bring back Bollywood to Kashmir,” said Modi while addressing a BJP rally in this Jammu and Kashmir town. Noting that the fastest growing industry in the world today is tourism industry, he said: “I have to bring back tourism to the state and I have to make J&K the ultimate tourist destination in the world.” Also Read - Wear Masks, Maintain Social Distancing: Modi in Message to Bengal For Durga Puja Festivities | Highlights

A number of movies have been shot in Kashmir, including “Kashmir Ki Kali”, “Mission Kashmir” and more recently “Haider”. The five-phase assembly elections begin in the state Nov 25.  Prime Minister Narendra Modi Saturday exhorted the people in this Jammu and Kashmir town to unshackle themselves from the yoke of dynastic politics. Modi said that Jammu and Kashmir had been held hostage by two families for over 50 years – without naming either the Congress or the National Conference. Read – Narendra Modi arrives in Jammu to campaign for BJP Also Read - Give Concrete Solutions, Not Plain Speeches: Congress Slams PM Modi Over His Address to Nation

“One family rules and robs the sate for five years and then after it becomes unpopular, it gives the power to rob the state to the other family. They have done a political match fixing between themselves. ”I appeal to you to unshackle yourselves from the yoke of this dynastic rule,” said Modi while addressing a well-attended Bharatiya Janata Party (BJP) poll rally here.

He asked people to vote for the BJP in large numbers so that the next government in the state is formed by the BJP on its own strength.