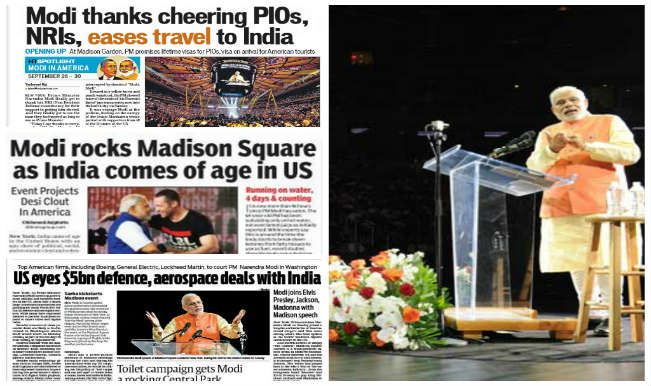 Going by how media is describing Prime Minister Narendra Modi‘s on-going visit to the US it would seem we are talking about a rockstar. His enthralling speech at United Nations General Assembly and his address at the Madison Square was a huge success with NRIs praising him for promising them of lifetime Indian visas and long-term tourist visas. Although his speech at the United States was tagged as unrealistic, there are many who are stunned by the speech of Modi. Also Read - PM Modi to Stock of COVID-19 Situation, Chair High-Level Meeting With CMs of 7 Worst-hit States Today

After the Modi wave in India, the Prime Minister was successful in creating a similar stir in United States. He has also won hearts of US lawmakers who found him ‘inspirational and visionary’. The media there is also in full support of the crowd puller. The New York Times described him as a Rock Star, they said, ‘Rock star Narendra Modi makes a big splash in United States media’. While another leading daily in US called him a ‘hero’ Also Read - India, China Agree to Stop Sending Troops to Frontline Border in Ladakh; to Continue Military Level Talks

While the foreign media is in full support of the Indian Prime Minister, the media houses back in India were not behind in covering Modi’s US visit. Newspapers today are screaming with headlines announcing his speech a grand success. They are noting his key visionaries that the Prime Minister promised NRIs.

However it was the Chinese media who took the entire thing differently. They said that United States is cuurentlty supporting Modi so that it will help them revitalize its relationship with America once again. They also went on to mention the summons against Modi filed by two victims of the Godhra riots in the New York Court on the day of arrival in US.

However the national media seems to be elated with Prime Minister’s visit. Here is a list of India’s top leading daily and their coverage of Modi’s Madison Square Garden address: 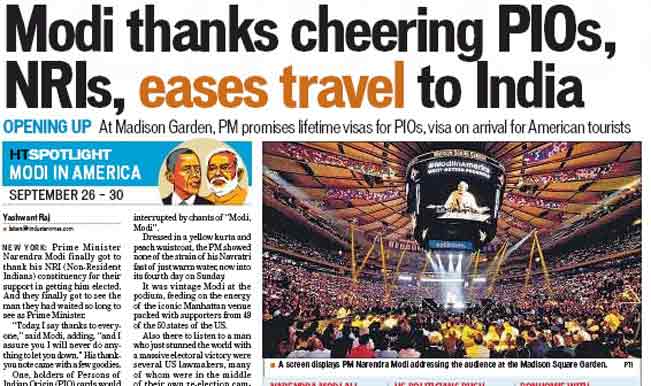 HT’s headline on their front page spoke about Modi’s venture to ease travel for Non-Resident Indians. The newspaper said that Modi had finally received a chance to thank NRIs for their support in getting him elected. The leading daily focused more on the ‘new visa concept’ and explained how an NRI would be benefited by it. Modi’s address to the youth by praising their attitude was also focused upon by them.

The Times of India calls it Epic 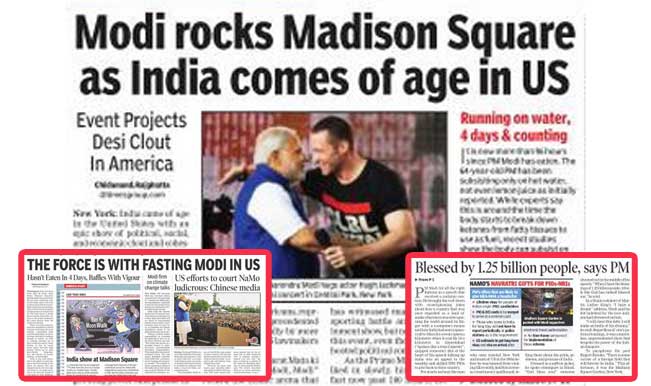 The Times of India described the event as an epic one. They said, ” The Indian Prime Minister and overseas Indian indulged in a mutual love-fest that sharply etched the country’s growing power and profile in the minds of Americans.” They also brought in the Navratri angle and maintained a small section focusing on Modi’s health saying that since 96 hours the Prime Minister is only relying on water as he is fasting.

However, they had a piece from Chinese media who termed US efforts to woo Modi after denying him visa in 2005 was contradictory. Calling it ludicrous, they said that America’s plans to revitalize its relations with India to boost its China containment policy. 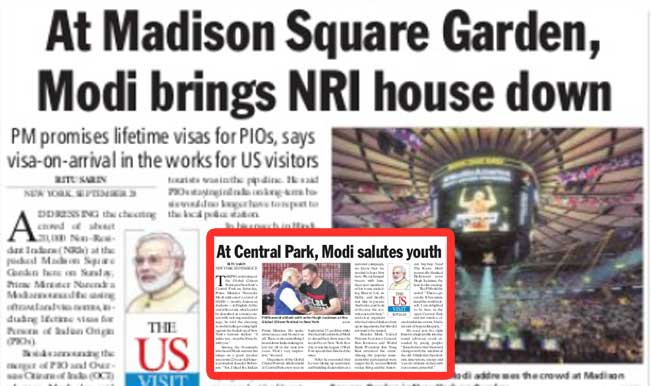 This leading daily also praised Modi’s new visa announcement and said the Prime Minister tried to set an emotional chord with the Indians there. They have also touched upon everything Modi said there including the successful Mangalyaan mission and the Jan Dhan Yojna. They also had headlines talking about Modi connecting with the youth and saluting them for their support with thorough social networking sites. 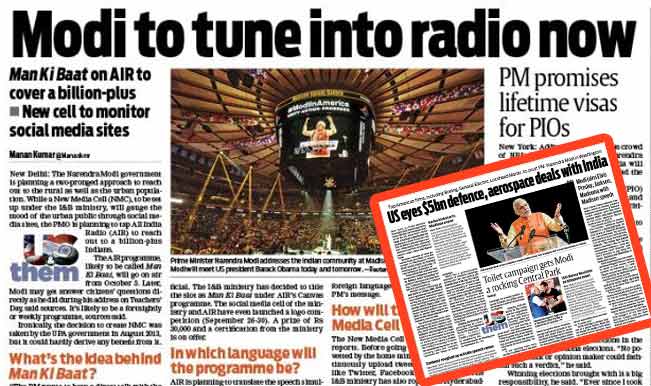 While all newspapers mentioned Modi’s visa schemes, DNA treated it differently. They told about the radio programme by Modi which is going to be aired soon. They started their copy introducing New Media Cell (NMC) under the ministry of Information and Broadcasting which will connect rural as well the urban population on All India Radio. They also focused about the top government officials and business leaders who will be pitching in for deals worth USD 3.5 billion in defence and aerospace and other projects for India.