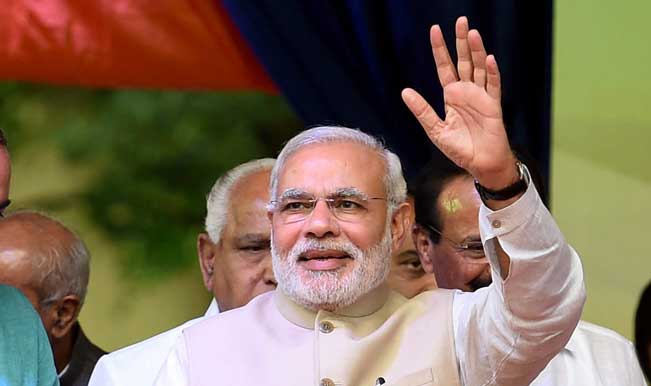 New York, Sep 28: A stable business environment and investment in human resources are some of the issues highlighted by a group of Indian-American corporate leaders during a meeting with Prime Minister Narendra Modi who invited them to come to India and teach business and entrepreneurship. In the over one hour-long meeting at a hotel where Modi is staying, the distinguished Indian-Americans discussed with him ways to enhance their contribution in human resource development and research activities. Also Read - PM Modi Likely to Hold COVID-19 Review Meeting With Chief Ministers of 7 Worst-hit States Next Week

Official sources said they were very upbeat about opportunities for growth in India and made various suggestions about possible avenues for consideration. They also spoke about usual requirements for stable business environment and need for investing in human resources in India.
Emphasising on his ambitious ‘Make in India’ as well as the ‘My Govt Digital Platform’ projects, Modi spoke about the importance he places on the digital initiatives and innovations as well as research. He invited them to come to India and teach during their vacations.

Before he embarked on the US trip, Modi launched the ‘Make in India’ campaign rolling out a red carpet to industrialists, both domestic and international, inviting them to make India a manufacturing hub that will help boost jobs and growth. The My Govt Digital Platform initiative was launched in July with an aim to help citizens contribute in governance by giving their opinions and views on important issues. There are multiple theme-based discussions on ‘MyGov’ where a wide range of people can share their thoughts and ideas.

For those who wish to go beyond discussions and wish to contribute on the ground, MyGov offers several avenues to do so. Citizens can volunteer for various tasks and submit their entries.