Making a strong pitch for growth of farmers, Prime Minister Narendra Modi today said the country cannot move forward without their progress and called for increase in crop productivity by 50 percent. 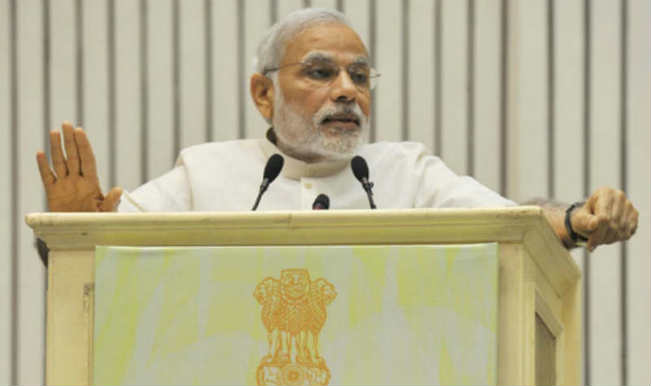 Also Read - Budget 2021: Tax Slabs May Remain Unchanged But Salaried Taxpayers Likely to Get Some Relief This Year

New Delhi, May 26: Making a strong pitch for growth of farmers, Prime Minister Narendra Modi today said the country cannot move forward without their progress and called for increase in crop productivity by 50 percent. Launching DD Kisan Channel, which would provide information about best agricultural practices and related content, to mark the completion of his government’s first year in office, Modi lamented that present system had left farmers to fend for themselves and there was a need to make the sector “vibrant and dynamic. (Also read: To take India forward, must take villages forward: Narendra Modi) Also Read - BJP, TMC Lock Horns Over Jai Shri Ram Chants as Mamata Refuses to Address Netaji Event in Kolkata | Key Points

“Why experts from various fields including seed, soil and fertilizer cannot come together to help farmers and increase productivity… The farming community is a big one. And, if we have to take India forward, we will have to take the villages forward,” Modi said. Linking the issue of malnutrition with low production of pulses, he noted that the country was dependent on imports to meet its requirement of edible oil and pulses and urged scientific community to work with farmers to ensure that there was enough production to meet domestic demand by 2022 when India celebrates its 75 years of independence. Also Read - ‘You Can’t Teach Dignity’: TMC Leaders Slam BJP For Chanting Religious Slogans at Netaji Event

Though his over 40-minute speech dealt with various issues pertaining to farmers and their betterment he did not mention the contentious land bill on which his government is facing stiff opposition, including from NDA allies. The Prime Minister observed that a study done over 200 years ago has shown that paddy productivity was 15-18 tonne per hectare without the help of advanced techniques and fertilizers, while the average grain production was now only 2 tonne per hectare. The world average is 3 tonnes, he said. Invoking former Prime Minister Lal Bahadur Shastri and his slogan ‘Jai Jawan-Jai Kisan’, which gave a fresh thrust to agriculture and led to a huge increase in grain production, he called upon farmers and experts to use modern science to give another boost to the sector.