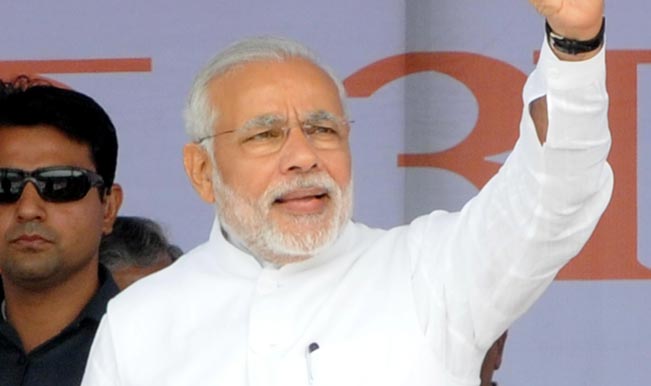 Also Read - Modi Confident Reforms in Past Months Will Boost Manufacture & Agriculture; Says Everyone to Get Vaccine Shots

Kathmandu, Nov 26: Prime Minister Narendra Modi has reached Rastriya Sabha Griha-the venue which will host the 18th SAARC Summit where he will deliver his address here on Wednesday. The theme of the summit is ‘Deeper Regional Integration for Peace and Prosperity’. The two-day summit will dwell upon on a number of crucial issues including improving transport connectivity among the member states to ensure greater flow of goods and services for boosting trade and commerce. Also Read - Bihar Polls: Rahul Gandhi Accuses PM Modi of Not Talking About Problems Like Unemployment Faced by Our Country

Prime Minister Modi is expected to lay out his vision on what he sees as regional cooperation in South Asia. After the inaugural session of the Summit, Prime Minister Modi will be having structured meetings with the Heads of Afghanistan, Bangladesh, Bhutan, Sri Lanka and Maldives. However, as of now, no meeting of him is scheduled with his Pakistan counterpart Nawaz Sharif. Also Read - Save Bihar From 'Jungle Raj': PM Modi Slams Lalu's RJD at Darbhanga Rally

Earlier on Tuesday, India and Nepal signed a number of memorandums of understandings (MoUs) and agreements, including on tourism, youth exchange and a motor vehicle agreement, setting up of a Nepal Police Academy. The agreements were signed in the presence of Prime Minister Narendra Modi and his Nepalese counterpart Sushil Koirala.

India and Nepal also signed twin-city agreements between Ayodhya and Janakpur, Kathmandu and Varanasi and Lumbini and Bodh Gaya. Besides, an extension of one billion dollars credit in assistance to Nepal were also inked. During his visit to the neighbouring nation, Prime Minister Modi also inaugurated the trauma centre in Kathmandu yesterday.

In a statement prior to his departure for Nepal, Prime Minister Modi said that the development of close relations with India’s neighbours was a key priority for his government. This is Prime Minister Modi’s second visit to Nepal in four months.