Narendra Modi salutes ‘can do’ attitude of youth 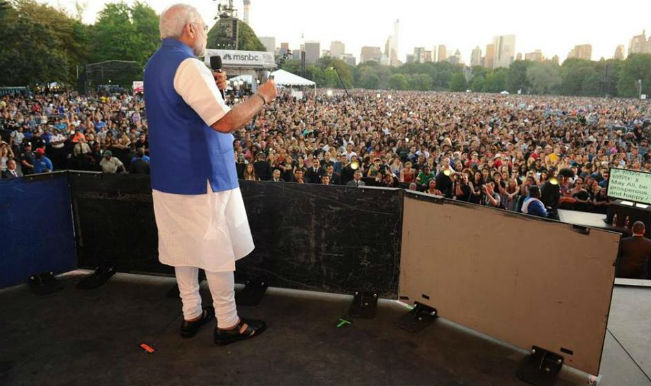 New York, Sep 28: Indian Prime Minister Narendra Modi hailed the “‘can do’ attitude of the youth” as he took his message of cleanliness to New York’s iconic Central Park. Modi Saturday said the power of youth would change the world. He was addressing people gathered here who are part of Global Citizen, a website network of people fighting lack of sanitation and poverty across the world among other pressing issues. Also Read - NCB Chief Rakesh Asthana Reviews Evidence in Bollywood Drug Nexus Case, Meets Officers

“How are you doing in New York?” Modi, dressed in an off-white kurta, greeted the crowd in English after the comperes of the show, Global Citizen Festival, announced the arrival of a person who changed the sanitation facilities of the Indian state of Gujarat from one of the worst to one of the best. Also Read - Deepika Padukone Asked To Not Play 'Emotional Card' After She Breaks Down Three Times During NCB Interrogation

“Namaste,” he said, adding that he was greeting people who were watching the show on TVs, smartphones, tablets and laptops as well. “I am truly delighted to be in (the open) and not in a closed conference room.”

Modi called youth the “hope” and said they will change the world. “I feel a current of hope in this park. Among you, I feel confident about the future…

“Some believe that the world changes with the wisdom of the old. I think that the idealism, innovation, energy and ‘can do’ attitude of the youth is even more powerful,” he said. The Indian prime minister said the youth will “put the light of hope in every eye” and their work to solve problems like sanitation and poverty would have deep impact in the times to come.

“That is my hope for India too. Eight hundred million youth joining hands to transform our nation. “…And the joy of belief in every heart. Lift people out of poverty. Put clean water and sanitation within the reach of all. Make healthcare available to all. A roof, over every head.”

“God bless. May the force be with you,” said the Indian prime minister who is on a five-day visit to the US.