The name started after Congress started the #Feku campaign on Twitter in a response to their #Pappu campaign aimed at Rahul Gandhi in the run-up to the Lok Sabha elections. 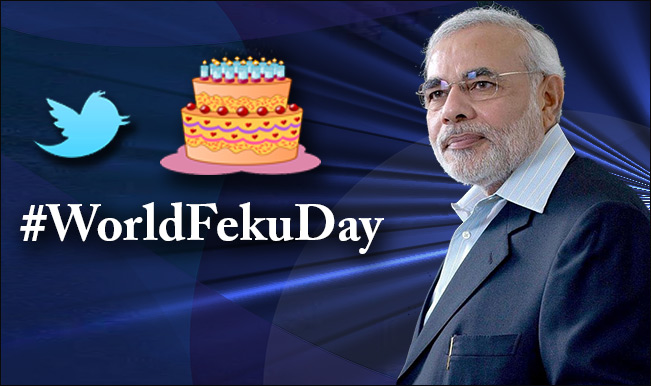 It is our dear Prime Minister Narendra Modi’s Birthday and Twitter is celebrating #WorldFekuDay. The hastag is one of top trends in India on Twitter and while there are some nasty tweets, there are some funny ones as well. For those who don’t know what or who Feku is or someone just landed on Earth after spending 2 years on Saturn, then Feku is the nickname of our Prime Minister Narendra Modi. The name started after Congress started the #Feku campaign on Twitter in a response to their #Pappu campaign aimed at Rahul Gandhi in the run-up to the Lok Sabha elections. #Feku played on Modi’s habit of overstating facts and exaggerating them. Also Read - Gucci Unveils Jeans With Fake Grass Stains For Whopping Rs 88,000, Internet Left Baffled!

Naturally, his birthday is a great day to start a war of words. So while #HappyBirthdayPM is the top trend in India, #World FekuDAy comes second. Here are a few good tweets which have the potential to make you laugh. Although some of them are a bit nasty. The first one is from ArGo’s (read Arnab Goswami) Times Now. Also Read - Soaring Popularity: Twitter Records 6.1 Billion K-Pop Related Tweets in Last 12 Months

Will this Chinese delicacy b served to Xi at dinner 2nite? Or are we the only lucky one’s to taste it? #WorldFekuDay pic.twitter.com/XwVDPjD82D — Yogi Jihadnath (@naqui_s) September 17, 2014

I think all Politicians are Feku, but if Modi is explicitly called Feku, he must be above average in ‘Feking’ ! :p #WorldFekuDay