Heeraben Modi had reached her local bank so as to get Rs 4500 worth of the no longer valid currency exchanged.

Gujarat, November 15: The policy of demonetization of the Rs 500 and Rs 2000 notes, it seems has affected all people living in India. By all people, we even mean the mother of the most important person in India. That’s right Heeraben Modi, Prime Minister Narendra Modi’s mother had to stand in a long line at a local bank in Gandhinagar, to get her now defunct notes exchanged for the  newly minted ones just like the rest of us.Also Read - Unaware of Demonetisation, Visually Challenged Beggar Seeks Exchange of RS 65,000 Life Savings

Heeraben Modi had reached her local bank so as to get Rs 4500 worth of the no longer valid currency exchanged. Visuals from the bank show her standing in line with others at her local bank. On handing over the old currency notes, Prime Minister Narendra Modi’s mother is handed over a bundle of newly minted notes. The bundle also included the high- value Rs 2000 note. Also Read - Rs 10 Lakhs Cash Including Demonetised Notes Recovered from Deceased Beggar's Home in Tirumala 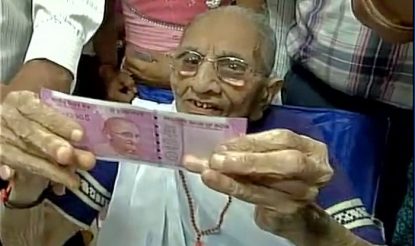 What is truly astonishing is that despite her grand age of 95, Heeraben Modi seems to be taking an active initiative to follow the citizens’ code. Modi’s visit to the bank can also be seen as a snub to the opposition that seems to frequently claim that members of the BJP and those close to the Prime Minister were pre-informed of the change that was to come. Further, the opposition has argued that the old and the poor are worst affected by the demonetization of the two major bank notes.  It was to prove this point that Congress Vice President Rahul Gandhi stood in line outside an ATM in Delhi and exchanged Rs 4000 worth of bank notes.

It seems, that Heeraben Modi’s visit to the bank is a step in the right direction for the Prime Minister’s vision of an economic-class free society. As rich and the poor stand together in serpentine queues outside banks and Automated Teller Machines (ATMs), it seems like a step in the direction of a classless society has indeed been taken. The policy of demonetization presents all the citizens of the country with similar problems despite their economic or political background.