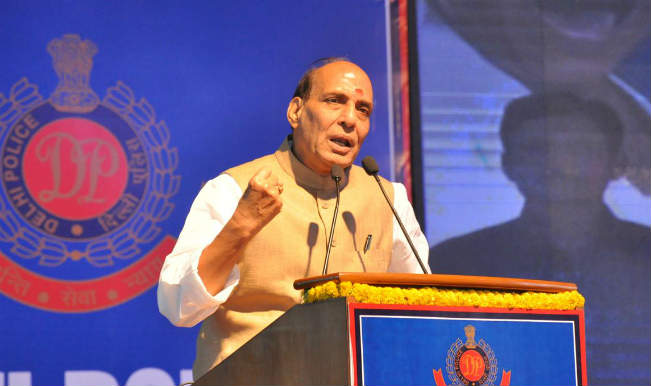 Kolkata, May 26: Union Home Minister Rajnath Singh on Tuesday said that the first year of the Prime Minister Narendra Modi-led NDA government had brought about visible change in the economy and respite from corruption. “There is a visible change in our economy . Inflation is under control. No one can accuse us of corruption, I can safely say that,” said Singh. The Home Minister further stressed that development remains the government’s primary focus. (READ: Rajnath Singh asks Delhi Lieutenant Governor, Chief Minister to resolve stand-off) Also Read - India To Buy 83 Tejas Light Combat Aircraft For Rs 48,000 Crore, Rajnath Calls It Backbone of IAF fighter Fleet

“No two views about Article 370. But the first focus is development. Whatever we do we want to do keeping people in confidence,” he added. Earlier in the day, Prime Minister Modi had in a message expressed his happiness to see India on “the fast path of development”, and added that the country’s environment since the NDAGovernment came to power last May is “suffused with a new enthusiasm”. Also Read - Global Economy Emerging from One of its Deepest Recessions, to Expand 4% in 2021: World Bank

The Prime Minister added that the country can be proud of the fact that it has an improved image on the international front and is determinedly marching forward to achieve its overall goal of providing welfare to the poor and lifting the marginalized sections of society.