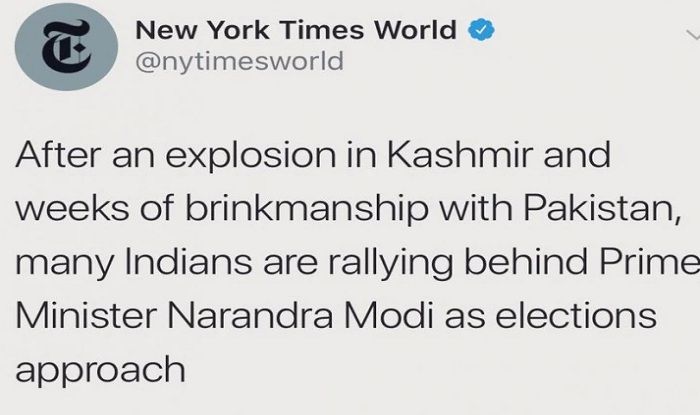 As soon the blunder was noticed by Twitterati, they lashed out at the daily and asked,”If pulwama was an explosion,  was 9/11 a plane crash or accident?

Check out some of the tweets here:

If Pulwama Attack is just an explosion then 9/11 is just accident made by drunk pilot.

#NYTimes terms#PulwamaTerrorAttack as an 'Exploison'. If it is not insensitive and ill informed then it is Racist.

This is like normalizing a terrorist attack which killed more than 44 @crpfindia men. pic.twitter.com/0C7uiDzdvr

if pulwama was an explosion, 9/11 was a plane crash? it's very insensitive of NYT to make light of the losses we suffer from islamic terrorism!

After facing backlash, the New York Times deleted the tweet and changed the headline to ‘In India’s Election Season, a Bombing Interrupts Modi’s Slump’. However, it still referred the attack as ‘bombing’ even though it was claimed by Pakistan-based terror outfit Jaish-e-Mohammad (JeM).

On Feb 14, around 40 Central Reserve Police Force (CRPF) personnel were killed after a suicide bomber attacked a CRPF convoy in Jammu and Kashmir’s Pulwama district with a vehicle laden with explosives. The convoy comprised 78 buses in which around 2,500 personnel were travelling from Jammu to Srinagar. The slain jawans personnel were travelling in a bus which came under the terror attack. 12 days after the attack, Indian Air Force carried out a pre-emptive strike in Balakot allegedly decimating biggest terror hideouts of JeM.