Did you miss out on any important news this past week? Not anymore! 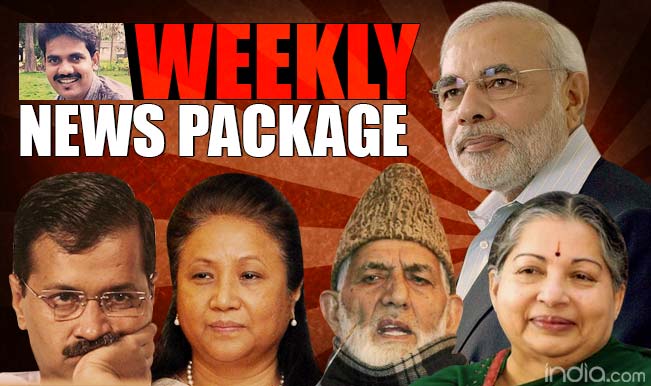 The last week saw a mixture of several political events across the country. From the normal scoop of events that is mainly allegations that Kejriwal imply on someone to the uncommon event of Prime Minister Narendra Modi insulting India while abroad; there were quite some events which were unexpected! Amid high speculations, IAS DK Ravi’s death was declared as a suicide by CBI in Karnataka, while in the neighbouring state of Tamil Nadu, J Jayalalitha (Amma) returned to politics after being convicted on the charges for corruption. Here is a round-up of those events, in case you missed the eventful week, that you can consume at a go. Also Read - Pradhan Mantri Gramin Awaas Yojana: Over 6.1 Lakh Beneficiaries in UP to Receive Rs 2691 Crore Assistance

The ruling BJP-PDP government witnessed a rift over issuance of Indian passport to Syed Ali Geelani, hard-line separatist leader, to meet his ailing daughter Farhat Jabeen Geelani in Jeddah, Saudi Arabia. BJP had openly denied passport to Geelani saying he should apologise for his mistakes in the past 25 years. However the party later bowed down before its ally party and agreed to give passport to the leader on humanitarian grounds. Minister of State, Home Affairs, Jitendra Singh said, “Law is clear on the provisions to be made on humanitarian grounds. Even if permission to go abroad is given, process will be similar to what everyone is put through.” PDP leader, Mehboob Beig and former Chief Minister of Jammu and Kashmir, Omar Abdullah were in support of the separatist leader so that he could meet his daughter. However, Geelani’s passport application has not been processed as it is incomplete, when the reports last came in. Also Read - India vs Australia: PM Narendra Modi, Sachin Tendulkar Congratulate Team India After Historic Win; Fans on Twitter Go Berserk

High drama between Delhi Chief Minister Arvind Kejrwal and Lt Governor Najeeb Jung regarding Shakuntala D Gamlin’s appointment as Chief Secretary (Services) does not seem to end too soon. The appointment of Gamlin as the Chief Secretary cited a spark as the Delhi CM accused her of favouring the Reliance Group. Although the AAP government opposed her, Gamlin took her office on the orders of Jung. Both Jung and Kejriwal met President, Pranab Mukherjee over the issue and accused each other of violating the Constitution. Amidst the drama, Ministry of Home Affairs issued notification to Delhi-government stating that the LG has power in appointment and transfer of bureaucrats. Kejriwal took strong objection over the notification and accused Centre for interfering in Delhi through LG.

Prime Minister Narendra Modi faced the wrath of social media over his jibe at previous governments during his tri-nation tour to China, Mongolia and South Korea. Modi said, “Earlier you felt ashamed of being born as an Indian. Now (after May 16) you feel proud to represent the country. Indians abroad had all hoped for a change in government last year.” A war broke out on Twitter as both Modi supporters and accusers flooded the micro-blogging site taking on Modi’s act of defaming the country abroad. #ModiInsultsIndia was on the top trends on Twitter! People accused the 64-year-old PM of going on foreign trips and then insulting his own country, which is one of the fastest growing economies now.

Central Bureau of Investigation (CBI) in its post mortem reports has proved that IAS officer DK Ravi had committed suicide in his Bangalore apartment on March 17. The alleged death of Ravi had drew criticism towards Karnataka government, as people’s protested for case to be handed over to CBI from Karnataka police. The CBI also quashed the theory that Ravi had called his female colleague 44 time and said that he had called her just once. It is being said that part of the story had been planted to defame the deceased officer or by people who feared revelation of their wrongdoings. Enquiry to find the wrong informer is now being conducted. CBI spokesperson, Kanchan Prasad said, “CBI would like to state that all aspects/hypotheses relating to unnatural death of Ravi are being inquired into. The matter is under investigation and conclusion is yet to be drawn in the matter.”