The website uses linear narrative to give voice to the rape victims in India. 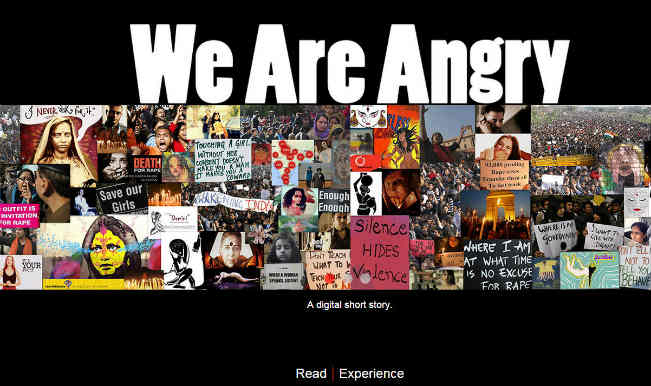 On December 16 two years ago a 23-year-old physiotherapy student was gang-raped and sexually tortured by five men on a bus driving around New Delhi. India, and the world, were revolted. Revulsion quickly ruptured into anger with outpourings of grief, protests, memorials and debates. Then came reports of a 5-year-old girl who faced a similar fate. And another. Also Read - Tomato Prices Cross Rs 100 In Tamil Nadu, State Plans to Sell It At Minimal Prices In ‘Pannai Pasumai’ Shops

India was outraged. I was outraged. As a women and a mother raising my daughter in India I needed an outlet for my fury and a way to raise awareness about the inequitable treatment of women. As a multimedia journalist I turned to familiar tools – the written word, video recordings, vox pops, stat graphics, photos – but I used them to tell a new kind of story.

Instead of adding to the piles of reports and editorials, I wanted to write a poignant fictional narrative from the point-of-view of a victim – a woefully disregarded and unheard voice in patriarchal India, where too often there is a shroud of blame hovering over the victim of rape. Was she out too late? Was she dressed provocatively? Was she drinking? Was she thinking herself as free as a boy? With such questions being asked by many people, never mind many pundits and politicians, it is no wonder that the victim of rape in India prefers not just anonymity but silence.

This is why I wrote We Are Angry – a digital short story about a young woman who is raped in India and the society around her. The story is written from the point-of-view of the victim because, for once, I wanted her voice – even if fictionally – to be heard.

Weareangry.net is home to the fictional short story of about 6000 words written in the voice of an ambitious young woman who is raped in New Delhi. Just who she is and exactly what happened to her (was it her fault, was she asking for it, was she a prostitute) unfold as the narrative progresses. Her story is interspersed with different perspectives of society: the police who apathetically get the victim to hospital, the students-turned-protesters who are fed up with poor policing and governance, the surgeons who can’t help but wonder why a woman is out so late at night, the parents who blame themselves for giving too much freedom to their girl-child, the wrongly accused who is brutalized, and the politicians who say little and do even less.

Being a journalist I also wanted to capture the turning point in India’s history – the outpouring of grief and anger from the public after the December 2012 gang-rape was unprecedented in modern-day India. Each page is illustrated with a piece of art, many of which were painted in response to the rape crisis.

Beyond that I also incorporated many multi-media elements to give the reader a different story-telling experience – from video recordings to audio and interactive graphics. On one page there are flashing news headlines, which can be clicked on and the “news story” read. Another page begins with a video in which two police officers are seen prodding the unconscious, supine victim on the roadside with their lathis and speaking to her as if she’s a prostitute, which according to the narrative, is filmed by two students who post it on Facebook and it goes viral, leading to days of protests. At this point audio and photographs from real protests are seen and heard. There are cartoons that appear when the victim is being sarcastic. Dissonant music plays when she thinks she’s dying. Thought-bubbles appear with tangential contemplations.

Since we have the technology to do more with the written form than present one-dimensional words on paper or a screen, I decided to bolster the fiction with real facts. The text of Weareangry.net is peppered with hyperlinks, taking the reader deeper into the facts behind the fiction. For instance, when there is a reference to killing the rapist a hyperlink can take the reader to a pop-up with a curated list of editorials on the death penalty debate that raged in India. When a protester shouts at a reporter about the low conviction rate of rapists, a hyperlink gives the reader the real stats with a URL to the source material. Even the Hindi swearwords and cultural references, like Eve Teasing, are all translated and explained via hyperlinks.

It is, some have said, a bold move for me – as an American not of Indian origin – to write such a provocative story. But India has been my home for nine years. I am a woman who has had to navigate the terrain carefully. But I choose to live here because it is a place I love. My husband is Indian and we have a little girl two-years-old. The treatment of women in India, and the world, is deeply important to me. And if ever there is a topic which deserves more coverage, more debate, more discussion, more voices, more 360-degree multi-media treatment – this is it.