New Delhi: The Northern Railways on Friday decided to cancel 20 trains, including Pune-Delhi Duronto and Delhi-Amitsar Shatabdi Express, in view of the second wave of novel coronavirus which has created havoc across the country. The cancelled trains include Agra Cantt-New Delhi Sspecial from May 2 till further advice; the New Delhi-Amritsar Junction Shatabdi Special on May 1 and May 2 and the Pune Junction-Hazrat Nizamuddin Duronto Special on May 3 and 4.Also Read - Indian Railways Cancels 40 Trains Amid Rising COVID Cases | Full List of Cancelled Trains Here

Here’s the full list of cancelled trains released by the Northern Railway: 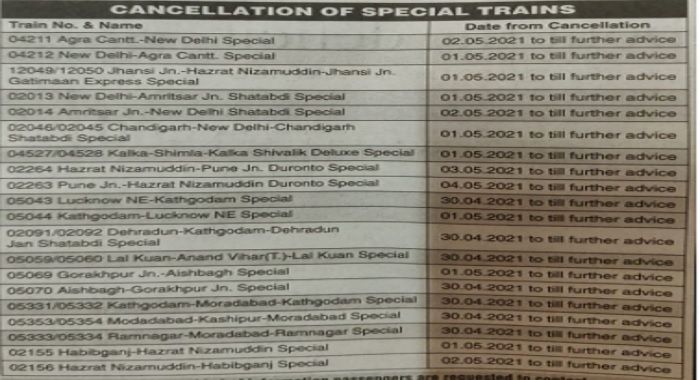 Earlier this week, the South Central Railway (SCR) had also announced that it has cancelled as many as 10 trains scheduled to run between April 28 and June 1. The cancellations were expected to affect some services to Andhra Pradesh, Telangana, Karnataka and Maharashtra.

The cancelled services were:

On the other hand, the railways planned to run 674 additional services between April and May to destinations having high demand like Gorakhpur, Patna, Muzaffarpur, Varanasi, Guwahati, Allahabad, Bokaro. While the railways maintained that it has not experienced any extra rush of passengers due to the heightening coronavirus pandemic in the country, ground reports suggest that there has been a surge in the number of migrant workers leaving cities for their home states.

Currently, the national transporter is running 1,514 specials trains on an average per day and 5,387 suburban services per day. It has also pushed into service 28 special trains as clones of highly patronized trains and running 984 passenger services.

“Despite COVID, trains will continue to run. Wherever there is demand, we are increasing services. We can rationalise service where demand is less. Over 70 per cent of the trains are currently in operation,” Railway Board Chairman Suneet Sharma said.