US President Barack Obama along with the First Lady of US Michelle Obama has embarked on his three-day historic visit to India. 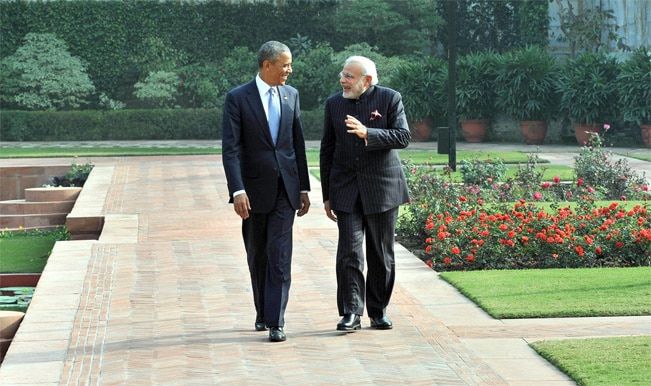 5.35 PM: In addition to our strong personal friendship,we are reflecting the warmth & affection between the Indian & American people. During our interaction I found out that Modi is getting less sleep. That is perhaps because he is new. After you have done it for 6 years, you can get an extra hour, says Obama. Also Read - Supportive Husband to a Powerful Woman: Barack Obama Recalls His First Meeting With Prince Philip

5.30 PM: Relations between two countries goes beyond what is on paper. I share good personal relations with Barack. We are comfortable with each other and share a chemistry.  I am new in this area. Relationship is more on how well the leaders know each other. There is openness and has brought the two countries closer.

5: 10 PM: Obama thanks Modi for the invitation and greets with Namaste. The US President also thanked Modi for the ‘çhai pe charcha’ and said White House should have more of this in future. Its an honor for me to be the first President attending ‘Republic Day. Strong relationship with India is important for America’s success. We agreed to focus on trade and commerce.

5.05 PM: Clean and renewable energy is our personal and national priority and I asked Obama to make renewable energy more accessible. Our strategic partnership wont be complete if we won’t promote progress in our region.

5.00 PM: India and US defence cooperation to new levels with advanced defence projects. India and US also agreed that we need comprehensive strategy to combat terror outfits.

4.55 PM: Narendra Modi and Barack Obama joint media statement and interaction begins. Modi thanks Obama for accepting the invitation to be the chief guest on Republic Day. This is natural global partnership, the success of this partnership is important for progress and peace around the world.

4.45 PM: Modi and Obama to address a joint press conference and issue a joint statement. The delegation level talks are over as members join the media for the statement.

4.30 PM: India and US delegations have been discussing way beyond the scheduled time. Reports suggest the Nuclear deal was the core issue of discussion.

3.30 pm News Update: India-US Nuclear deal has been finalised and  Barack Obama and Narendra Modi’s joint statement will be delivered soon. Reportedly, the Indo-US trade is now close to $100 billion annually. If government aides are to be believed then ‘the nuclear deal is a done deal already.’   (Read- Barack Obama in India: 4 places the US president will visit in and around New Delhi)

3.09 pm News Update: Naredra Modi and Barack Obama take a walk around the Hyderabad House before the two settle down to have a cup of tea in the garden  (Also read- Barack Obama’s India visit itinerary: Complete schedule of US President’s trip for India’s 66th Republic Day)

Lunch time. Here is what PM @narendramodi & Prez @BarackObama are having for lunch. pic.twitter.com/N9D4TIsqol

1.45pm News Update: US President Barack  Obama and Narendra Modi begin talks on crucial issues at the Hyderabad House. No press is allowed to attend and cover the Hyderabad House event.The briefing is likely to take place around 3 PM where both of them will deliver statements.

1.20 pm News Update: US President Barack Obama arrives at the Hyderabad House to held formal bilateral talks with Prime Minister Narendra Modi. The leaders will have a working lunch at the Hyderabad House. They will also address the media after their talks. The briefing is likely to take place around 3 PM where both of them will deliver statements.

1.10 pm News Update: As US President heads towards Hyderabad House in central New Delhi, PM Narendra Modi arrives at Hyderabad House. There will be a private lunch at 1.30 pm. No press is allowed to attend and cover the Hyderabad House event.

12.44 pm News Update: US President Barack Obama reaches Raj Ghat for the memorial to Mahatma Gandhi. Obama said, “He would have loved to dine with Gandhi.” Although it was anticipated that Modi would join Obama for Raj Ghat , but Modi gave it a miss. Obama is accompanied by Piyush Goyal.

12.15 pm News Update: Barack Obama reaches Rashtrapati Bhavan to a ceremonious welcome. President’s bodyguard escort the visiting US President Barack Obama to the welcome podium followed by 21-gun salute. President Pranab Mukherjee along with Prime Minister Narendra Modi welcome US President Barrack Obama, who is the chief guest on Republic Day this year. Obama takes salute as national anthems of United States and India are played by the Army band.

10.50 am News Update: Barack Obama and the rest of them reach Hotel ITC Maurya. The presidential couple will later head to the Rashtrapati Bhavan for a ceremonial reception at noon.Day One will see US President Barack Obama visit Rajghat and offer tributes to Mahatma Gandhi at his memorial. Later, Obama will hold a session with Indian authorities at Hyderabad House, followed by dinner at Rashtrapati Bhavan with President Pranab Mukherjee.

10.24 am News Update: The welcoming ceremony of Obama was short and they were whisked away within minutes in The Beast, the presidential limousine, that was parked right across the red carpet.Departing from protocol, Prime Minister Narendra Modi receives Obama and Michelle at the airport. Obama first shook hands with Modi and then embraced him for a tight hug. Clad in a kurta and red shawl Modi and Obamas had a long conversation holding hands.

10.15 am News Update: The aircraft Air Force One landed at Delhi airport and  has been parked at the Air Force technical area at Palam. Prime Minister Narendra Modi received Barack Obama and Michelle Obama  at the VVIP terminal of the Indira Gandhi International Airport.. He was accompanied by US ambassador Richard Verma.

US President Barack Obama along with the First Lady of US Michelle Obama has embarked on his three-day historic visit to India. Obama will be in Delhi on January 25, 26, 27 and will also be the chief guest for 66th Republic Day celebrations. Obama departed from US by Air Force One, the presidential aircraft, from the Andrews Air Force Base on Saturday. He will be accompanied by his delegation that includes, Democratic Minority House leader Nancy Pelosi and Ami Bera, co-chair of the Congressional Caucus on India and Indian Americans.

The security has been beefed-up in the capital city of Delhi prior to Obama’s visit. Around 10,000 paramilitary forces and 30,000 Delhi Police force will be deployed in the capital city early morning of January 26. The airspace over the capital will be monitored by special radars. Also, the Delhi airport area will be secured with the help of Special Protection Group (SPG) personnel and US Secret Service agents.

This trip will supposedly bring depth to the stagnant Indo-US relations. Also the US analysts are cautiously optimistic about India, US ties. Substantive outcome is expected out of this three-day state visit.