Patnaik said that frequent elections affect the pace of development and also rock the spirit of cooperative federalism.

The meeting of heads of political parties, led by the Modi government, to discuss the proposal of ‘One Nation One Election’ took place in New Delhi on Wednesday, and while there were mixed responses to the idea, some were of the opinion that it would be beneficial for the country.

Chaired by Prime Minister Narendra Modi, the meeting was held to explore possibilities of holding Lok Sabha and assembly elections together amid no show by various opposition parties.

Among those who attended the meeting was Odisha Chief Minister Naveen Patnaik, who has said that his party fully supports the move, as frequent elections affect the pace of development.

“Frequent elections affect the pace of development and also rock the spirit of cooperative federalism. The BJD will fully support the idea of ‘one nation, one election’,” Patnaik said, adding there has to be a “give and take” attitude in the larger interest of the country.

Patnaik, who is also the BJD president, strongly advocated a re-look into the Land Acquisition Act and the Forest Conservation Act. 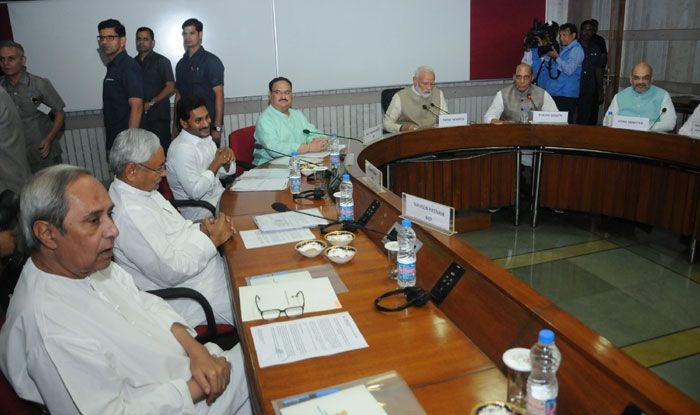 Naveen Patnaik at the One Nation, One Election meet. Photo Courtesy: IANS

According to a BJD communique issued Bhubaneswar, the Odisha chief minister, who has been demanding special category status for the state, demanded that natural disaster may be considered a criterion for special focus on states.

Noting that no country has ever progressed without empowering half of its population, Patnaik said, “The BJD will extend complete support to Women’s Reservation both in Lok Sabha and Assembly elections.”

On development of ‘aspirational districts’, he said the Centre should focus on macro issues like tele-density, banking network and railway reach.

“Micro issues may be left to the state to focus on with support from the Centre,” Patnaik said.

Asserting that land acquisition laws should facilitate society’s welfare and the country’s growth, the Odisha chief minister said, “We have to have a relook at the 2013 Act, especially from the point of view of railway and road infrastructure development.”

He also opined that there is a need to relook into the Forest Conservation Act as environment protection and economic growth have to complement each other.

Central and state public sector undertakings should be treated on an equal footing for statutory requirements.

On the Mahatma Gandhi’s 150th birth anniversary celebration, Patnaik said he had earlier suggested the country to consider including the uniquely Indian idea of ‘non-violence’ or ‘ahimsa’, in the preamble of India’s Constitution.

“This will ensure that future generations, not just of Indians but people around the world will be reminded of the profound truth of this (Ahimsa) principle,” he said.

Patnaik said his party, has always been supportive of any action taken in the interest of the country and its people and will continue to do so in the future.

With Inputs From PTI