Speaking at a pro-CAA rally in Bhubaneswar, Shah accused the Congress, TMC, BSP and SP of lying over CAA. "I once again reiterate that no one will lose their citizenship," he added.

New Delhi: Union Home Minister Amit Shah, who has received severe flak from the opposition for his failure to stem the communal violence in northeast Delhi, on Friday once again accused the opposition of orchestrating riots in the national capital, in what were his first public remarks on the issue since violence erupted in the region. Also Read - Delhi Violence: 'Political Discussions Later, Let's First Restore Peace,' Says Mamata Banerjee on Calls For Amit Shah's Resignation

On Friday, speaking at a pro-Citizenship Amendment Act (CAA) rally in Bhubaneswar, Shah accused the opposition of lying over the CAA, taking various opposition parties’ names to question why they were doing so. “Congress, Mamata didi (West Bengal CM Mamata Banerjee, Samajwadi Party, Bahujan Samaj Party, all of them are opposing the CAA. They say it will take away citizenship of minorities. Why do you lie so much,” he said. Also Read - Delhi Violence: SC Lawyer Files FIR For Immediate Arrest of Tahir Hussain; Death Toll Touches 42 | Highlights 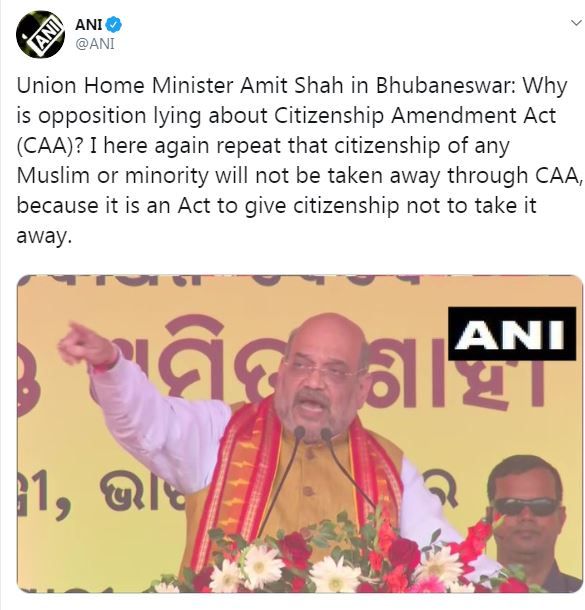 However, speaking to reporters later, the West Bengal CM, when questioned on the issue, said that ‘political discussion (calls for Shah’s resignation) can take place later as now is the time to solve the problem (restoring peace in Delhi).’

Notably, Shah and Mamata are in the Odisha capital for the 24th Eastern Zonal Council (EZC) meeting in the city, which was also attended by the Chief Ministers of Odisha, Jharkhand and Bihar. The meeting was chaired by Shah.

“Here, I once again reiterate that the citizenship of any Muslim or minority will not be taken away through CAA, because it is an Act to give citizenship not to take it away,” the Home Minister further said at the rally.

The violence in northeast Delhi first erupted as a clash between pro- and anti-CAA groups on Sunday. However, it escalated into full-blown communal riots on Monday and continued on Tuesday. It was only controlled on Wednesday after National Security Advisor (NSA) Ajit Doval was on Tuesday night given the responsibility to restore peace in the affected areas.