Among popular dishes on Parliament canteen menu, Hyderabadi Mutton Biryani that used to cost Rs 65 is now priced at Rs 150, while boiled vegetables are being sold at Rs 50 as opposed to the previous rate of Rs 12.

New Delhi: With subsidy on canteen food in Parliament being stripped off as an option for MPs and other lawmakers and workers, eating non-vegetarian food will become significantly expensive in the Parliament canteen. According to the new prices, a vegetarian buffet will cost Rs 100, whereas the cost for a non-vegetarian buffet has been hiked to Rs 700. Also Read - Parliament Updates: On Farm Laws, PM Modi Tells Opposition 'Ab Zyada Ho Raha Hai', Congress Stages Walkout

The cheapest item on the menu in the Parliament canteen is a chapati, which costs Rs 3 each. Meanwhile, the non-veg buffet is the most expensive item on the list. Among other popular dishes, Hyderabadi Mutton Biryani that used to cost Rs 65 is now priced at Rs 150, while boiled vegetables are being sold at Rs 50 as opposed to the previous rate of Rs 12. Also Read - Didn't Sit on Rabindranath Tagore's Chair, Says Amit Shah, Shows Photos in Lok Sabha 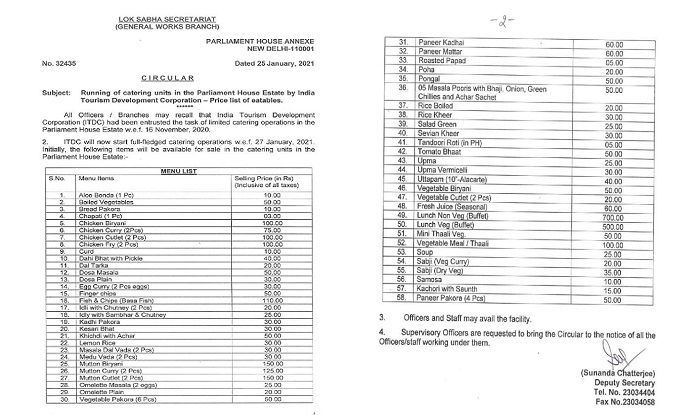 Also Read - With Ghulam Nabi Set to Exit Rajya Sabha, Who Will be The Next Leader of Opposition?

The revised prices will come into effect from tomorrow, January 29, as the Budget session begins in the Parliament.

The decision, announced by Lok Sabha Speaker Om Birla, will not only save over Rs 8 crore, but it may also earn the Parliament some profit. Announcing the revised prices, Birla had also said the Parliament canteens will now be run by ITDC in place of Northern Railways.