People for the Ethical Treatment of Animals (PETA) activists who were campaigning for vegetarianism ahead of the Bakrid were allegedly manhandled by a mob in the old city area of Bhopal. 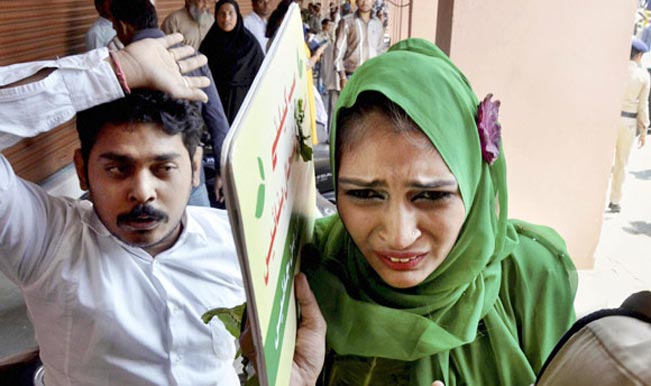 Bhopal, Sep 22: People for the Ethical Treatment of Animals (PETA) activists who were campaigning for vegetarianism ahead of the Bakra eid were allegedly manhandled by a mob in the old city area of Bhopal. Police registered a case against three PETA activists under section 295 A (outraging religious feelings), Inspector General of Police Yogesh Choudhary said. Also Read - Ahead of Wedding Season, PETA Campaigns For Horse-Free Baraat Ceremony; Highlights Animal Cruelty

As the PETA activists were manhandled, police intervened to protect them and took them to the police station, he said. PETA said in a statement that “just in time for Bakra eid” a lady activist wearing a burqa made of lettuce leaves and vegetables and others were promoting animal- and Earth-friendly vegan diet through a peaceful awareness event near Taj-ul Masjid. Also Read - Supreme Court Expresses Concern Over Fake, Communal News on Social Media

They were assaulted by a mob even before the campaign began, and had to be rescued by the police, it said. Poorva Joshipura, PETA India CEO, said, “PETA organises peaceful animal protection awareness programs for Christmas, Easter, Diwali, Janmashtami and other holidays, as well as Eid” and “it is shameful that in working to stop violence, our volunteers were made to suffer violence”.

Topics:
Bakra eidnewsPeople for the Ethical Treatment of Animals (PETA)PETA