The 296-km expressway, built at a cost of Rs 14,849 crore, will pass through Chitrakoot, Banda, Hamirpur and Jalaun districts.

The 296-km expressway, built at a cost of Rs 14,849 crore, will pass through Chitrakoot, Banda, Hamirpur and Jalaun districts. It will also supplement the nodes of the Uttar Pradesh Defence Industrial Corridor (UPDIC), which was announced by the central government in February 2018. Also Read - PM Modi to Lay Foundation of Bundelkhand Expressway, Distribute Assistive Aids in Prayagraj

The Bundelkhand Expressway will link its namesake city to Delhi through Agra-Lucknow Expressway and Yamuna Expressway, which runs between Agra and Greater Noida.

On Friday, the Prime Minister had tweeted: “Next-gen Infrastructure for a better tomorrow! Delighted to be laying the foundation stone for the Bundelkhand Expressway at Chitrakoot. This expressway will be the harbinger of progress for youngsters in the region and will also help the Defence Corridor coming up in the state”. 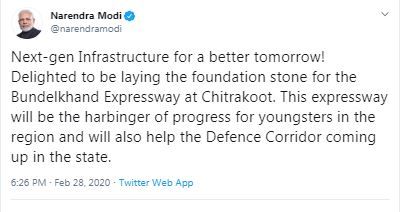 Addressing a rally on the occasion, PM Modi spoke about how nearly Rs 12,000 crore have been deposited in the accounts of more than two crore farmer families of the state, including in Chitrakoot. “You can imagine, Rs 12,000 crores in just one year, that too directly in the bank accounts, without middlemen and discrimination,” he said.