PM Modi Releases Over Rs 18,000 Crore For Around 9 Crore Farmers Under PM-KISAN Scheme

PM Modi released the instalment of Rs 2,000 to every farmer on the birth anniversary of Atal Bihari Vajpayee, which is every year celebrated as "Good Governance Day" by the ruling party.

PM Modi enabled the transfer of money with the push of a button at an event which the ruling BJP has made into a mega exercise to reach out to farmers by having its leaders interact with the farming community at more than 19,000 venues across the country and also listen to the prime minister’s address. Also Read - Mamata Banerjee's Ideology Destroyed Bengal, TMC Playing Politics Over PM-Kisan Scheme, Says PM Modi

PM Modi released the instalment of Rs 2,000 to every farmer on the birth anniversary of former prime minister and BJP stalwart Atal Bihari Vajpayee, which is every year celebrated as “Good Governance Day” by the ruling party. Also Read - Protesters Turn Down Govt’s Offer For Talks, PM Modi to Interact With 9 Crore Farmers Today | Key Points

Under the PM-KISAN scheme, a financial benefit of Rs 6,000 per year is provided to small and marginal farmers, payable in three equal instalments of Rs 2,000 each. The fund is transferred directly to the bank accounts of the beneficiaries.

Interacting with farmers after releasing Rs 18,000 crore as part of PM Kisan Samman Nidhi scheme, PM Modi told a farmer from Odisha: “I urge you to tell farmers about the Kisan Credit Card and its various benefits which include the availability of loans at low-interest rates.”

Naveen, a farmer from Odisha during interaction with PM Modi, said, “I received my Kisan Credit Card in 2019. I took an amount of Rs 27,000 on loan from the bank on a mere 4 per cent interest as compared to 20 per cent from intermediaries.”

Another farmer Hari Singh Bishnoi, from Fatehabad in Haryana, said, “Earlier, I used to do rice farming but I am also interested in gardening. I have planted lemons in 3 acres and guavas in 7 acres of land. We sell them in local mandis and get a good amount for it.”

A farmer from Madhya Pradesh’s Dhar, Manoj Patidar said, “So far, I’ve received Rs 10,000 under PM Kisan Samman Nidhi. Under the new farm laws, we can now sell the farm produce to any private business/organisation. This year, I sold 85 quintal soybean to ITC.” 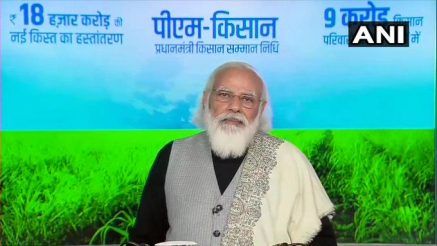 Addressing the farmers after the event, PM Modi said, “Today, more than Rs 18,000 crores have been directly deposited in the accounts of farmers; no middlemen, no commissions.”

The programme comes amid protests by various farmer unions against three farm laws recently enacted by the Modi government.

The government has insisted that these reforms are in the interest of farmers.