"There will be no shortage of funds allotted to J&K, but it will be monitored closely...It will be ensured that these funds reach the people," Narendra Modi said. 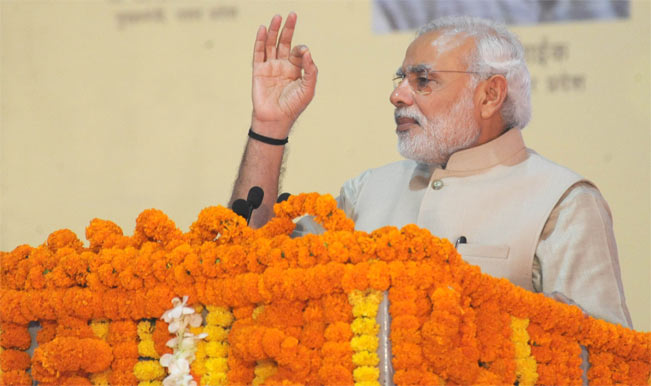 Udhampur (Jammu and Kashmir), Nov 28: The leaders here “indulge in corruption and emotional blackmail”, said Prime Minister Narendra Modi and added that he has “tightened all the screws” to ensure that funds allotted to Jammu and Kashmir by the central government are properly utilised. Also Read - BJP Workers Detained For Trying to Hoist National Flag at Lal Chowk, PDP Office in Srinagar | Watch Video

Addressing a massive BJP election rally here on Friday, Modi said: “I have tightened screws to ensure that funds are not looted and these are utilised for the purpose for which these are allotted by the Centre.” Also Read - Observe Festivals With Modesty, Light Lamp For Soldiers: Key Points From PM Modi's Mann Ki Baat

“It is because I want proper utilisation of these funds that I have tightened all the screws. It is because of this that both those in power and those in opposition in J&K are criticising me, because the mutual policy of loot by these parties has suffered,” the prime minister said at the first of the two rallies he addressed in the state ahead of the second phase of assembly elections.

“There will be no shortage of funds allotted to J&K, but it will be monitored closely…It will be ensured that these funds reach the people,” he added.

On the ongoing assembly elections, Modi said: “The massive voter turnout in the first phase of elections has proved the people’s resolve that ballot cannot be made subservient to bullets. This vote has been a victory for democracy…”

Without directly speaking about the gunfight between the security forces and the guerrillas who sneaked into India from Pakistan in Arnia area of Jammu district, in which 11 people were killed, the prime minister said the high voter turnout in the state elections has frustrated separatists.

“The terrorists have been frustrated because they can no longer hold democracy and people hostage in the state. The people have sent them and the world at large a loud message that they want change and development by exercising democratic rights.”

Jammu and Kashmir is having five-phase elections that began Nov 25. The ballotting ends Dec 20 and the votes will be counted Dec 23.

Modi said there have been a dozen prime ministers in India but none has had the opportunity to visit Jammu and Kashmir as much as he has had. “I decided to spend Diwali with the flood-affected people here. My decision was not for politics, nor was it for gathering votes…,” he said. He added: “What has not happened in 30 years, if I do not do it in five years, then you can hold me accountable for it and even question me.”

“Development has been stuck in Jammu and Kashmir for 30 years. Leaders from ruling and opposition parties indulge in corruption and emotional blackmail.” “We have to work towards the valley’s development.. and I need your help in doing it,” he said.

Modi spoke of campaign against corruption and addressing the problems of the people in Jammu and Kashmir which had remained unresolved during the last many decades.

“(Former prime minister) Rajiv Gandhi said when funds are allotted to states by the Centre, out of each rupee of such fund allocations only 15 paise reached the people on the ground. This was said by him when he was the prime minister of the country and when both the states and the Centre were ruled by the Congress.”

“I want to ask you: who looted those 85 paise from each rupee allotted to the states?”

Modi said the National Conference (NC) and the Peoples Democratic Party (PDP) took turns in looting the people of the state. “It has become the habit of the leaders of these parties to loot the people.” “If you want every penny of that looted money to be returned to you, you must vote BJP to absolute power in the state and I promise I will ensure that funds looted in the past are returned to the people,” he said.

He appealed to the people of Jammu and Kashmir to vote for the BJP so that the party’s mission 44-plus to form a government on its own in the state is realised. “If I do not achieve for you in five years what could not be achieved in 30 years, I shall be directly answerable to you.”

He introduced the BJP candidates contesting elections for the six seats in Udhampur and Reasi districts where polling is scheduled to be held Dec 2 in the second phase of the five-phase J&K assembly elections.