Modi said that development work undertaken by the party's MPs must be "visible and not just on paper" and government's work and performance in parliament should reach people. 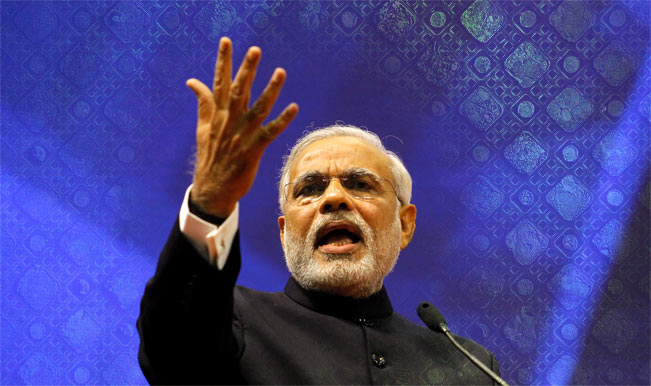 On party membership, he said that every booth in the country should have at least 10 primary members and party activities should be given utmost priority. Also Read - 'Great Leader And Loyal Friend', Trump's Birthday Wish For PM Modi

According to sources, Modi also said that development work undertaken by the party’s MPs must be “visible and not just on paper” and the government’s work and performance in parliament should reach people. “Our party agenda is development and good governance and we should not dither from it. We will not allow dilution or deviation from our commitment,” he said.

The sources said that the ruling party feels that controversial comments were “derailing the development agenda” of the government and is uniting the opposition against it. This is the second time the prime minister has warned MPs against making communal remarks in the meeting of parliamentary party, held every Tuesday.

Earlier, following controversial comments by minister Sadhvi Niranjan Jyoti, Modi had cautioned MPs to avoid such comments.  Jyoti had reportedly said at a public meeting here: “Aapko tay karna hai ki Dilli mein sarkar Ramzadon ki banegi ya haramzadon ki (You have to decide if you want a government in Delhi to be led by the children of Lord Ram or illegitimate children).”

While the government continued to face the heat over conversion row, party MP Yogi Adityanath stirred the pot further with his reported remarks that there was nothing wrong if people willingly re-convert to Hinduism.

According to a party release, Modi recalled the 1971 war with Pakistan and said that the mass genocide in then East Pakistan led to military intervention by India leading to over 90,000 Pakistani troops surrendering Dec 16, 1971 which is marked as Vijay Diwas. “He emphasised it was a day to commemorate,” the release said.

On the decision to observe Dec 25, the birthday of former prime minister Atal Bihari Vajpayee, as Good Governance Day, Modi said Vajpayee’s “exceptional governance abilities should be recognised and publicised”.

Seeking to differentiate between development and governance, he said that while constructing a bus stop was the first, seeing that buses ply on time and the place is clean and safe were ingredients of governance.

On Swachh Bharat, he said people had taken a lead and “if we fail to do it, we will be rendered irrelevant”. “We have to undertake this crusade with commitment and utmost simplicity. Every state and institution has given top most priority to cleanliness,” he said.

Modi said MPs should educate themselves minutely about programmes of the government and should keep abreast of the initiatives, while calling on ministers to hold interactive sessions with party MPs.