Robert Vadra appeared before the Enforcement Directorate (ED) on Wednesday in a money laundering case.

New Delhi: Congress President Rahul Gandhi’s brother-in-law Robert Vadra on Wednesday appeared before the Enforcement Directorate (ED) in relation to a money laundering case– but he did not come alone. Also Read - Hoshiarpur Rape: Gandhis Can't See Atrocities Against Women in States Where Congress is in Power, Says BJP

Priyanka Vadra’s choice to accompany her husband to the ED’s office is being seen as a strong political statement that she is sending out to her adversaries, soon after securing a strategic role in the party. Also Read - Woman Congress Worker Thrashed at Party Meeting For Protesting Against Candidature of 'Rape Accused' in UP Bypolls

Speaking to the media after dropping her husband off at the ED office, Priyanka Gandhi Vadra said, “Duniya jaanti hai, kya ho raha hai.” (The world knows what is happening.)

Delhi: Robert Vadra inside the Enforcement Directorate office, to appear in connection with a money laundering case pic.twitter.com/HIiwLYpMou

Robert Vadra’s statement is currently being recorded at the ED office. The Enforcement Directorate team led by Joint Director accompanied by Deputy Director and five other officers is questioning Robert Vadra, in connection with a money laundering case.

Official sources say Robert Vadra is being questioned on transactions, purchase and possession of certain immovable assets in London and his statement will be recorded under the Prevention of Money Laundering Act (PMLA). Vadra is being probed in a money embezzlement case pertaining to a London-based property worth 1.9 million pounds that he purchased.

Vadra was granted interim protection from arrest in the case by a Delhi court on Saturday but was directed by Special Judge Arvind Kumar to join the ED investigation on February 6.

PRIYANKA WOULDN’T BACK DOWN

Vadra’s decision to be seen with her husband is also a show-tell of her fearless countenance in the face of what Congress terms a ‘political witch-hunt’ against UPA Chairperson Sonia Gandhi’s son-in-law.

From the ED office, Priyanka Gandhi Vadra reached her mother Sonia Gandhi’s residence at 10 Janpath and then to her office at the Congress headquarters in Delhi. 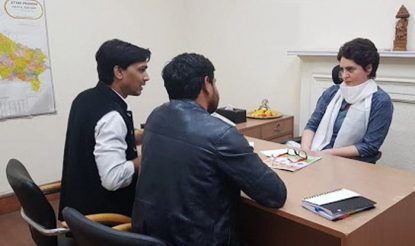 Priyanka Gandhi Vadra in her office at the Congress HQ.

Earlier in the day, Robert Vadra’s close aide Manoj Arora was also granted interim protection from arrest in the same case till February 16.