"The inflation has made the life of common man worse, prices of onion have crossed Rs 200 in some parts and petrol has crossed Rs 75, but the BJP government is in sleeping mode", stated Priyanka.

New Delhi: As price of petrol crossed Rs 75 mark and onion shot up to a whopping Rs 200 per kg in some parts of the country, Congress general secretary Priyanka Gandhi Vadra lambasted the Centre, saying that the ‘inflation has made the life of common man worse but the Narendra Modi-led government is in sleeping mode’. 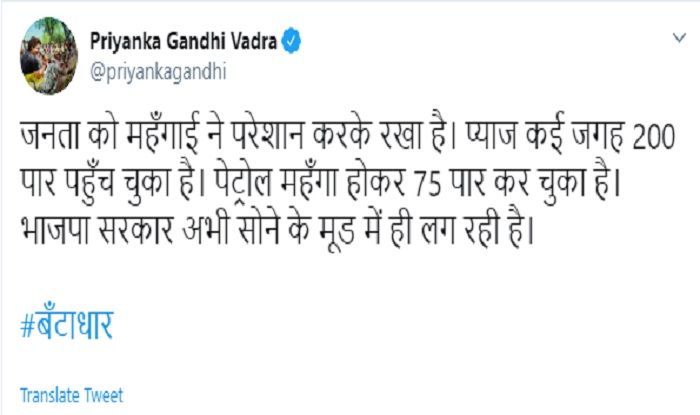 The Congress leader’s fresh salvo at the government comes a day after price of onion shot up to a whopping Rs 200 per kg in Bengaluru allegedly due to severe short supply in the market.

Almost 50 per cent of the onion production gets lost after factoring in crop loss and post-harvest loss, leaving only the balance to arrive in the market.

Heavy rains during the harvest also led to the rotting of a good share of the onion production.