At a time when corporate cheer leaders of Narendra Modi were expecting more of austerity, the government left them confused, by shifting their focus from India Inc to distressed rural India.

Financial budget for the year 2016-17 is in line with the spree of activities taken by Narendra Modi-government as of late to counter the jibe of suit-boot ki sarkaar. Contrary to the perception created by right-leaning supporters of NDA regime, the budget turned out to be more socialistic in nature, with an increased emphasis on rural upliftment. Supporters were left astonished and critics stunned with the kind of fiscal policy prepared by Finance Minister Arun Jaitley, increasing the governmental expenditure in a substantial manner for the rural India. Also Read - ‘Centre's Farm Bills Will Only Help Hoarders’: Mamata Says Will Take Steps For Interest of Farmers

On the other-hand, the corporate sector was left unimpressed with the budget, citing the absence of radical measures which would catalyze the creation of a conducive environment for business. The anger of ‘The Great Indian Middle Class’ is clearly visible as the government has decided to tax the 60 per cent corpus on Employee Provident Fund (EPF) at the time of withdrawal. (ALSO READ: Budget is pro-village, pro-poor, pro-farmers, says Narendra Modi) Also Read - Farm Reform Laws: 'Their Medium to Earn Black Income is Finished', PM Modi's Veiled Attack on Opposition

At a time when corporate cheer leaders of Narendra Modi were expecting more of austerity, the government left them confused, by shifting their focus from India Inc to Bharat, the rural side of the nation whose economic condition is deteriorating quarter after quarter. What transpired the economically ‘right’ BJP to take a ‘left’ turn? Also Read - India-Denmark Bilateral Summit: PM Modi Urges Denmark Counterpart to Join Hands to Work Towards Supply-chain Diversification

Attaching political gains to the pro-agrarian turn of Modi-government would be passing too early a judgement. However, if the recent electoral setbacks of the Bharatiya Janata Party (BJP) are taken into account, it seems quite legit that the saffron regime is now trying to reach out to the rural constituents.

Reviewing the recent electoral reversals of the Modi-led BJP, one could see the rapid decline of rural voteshare. 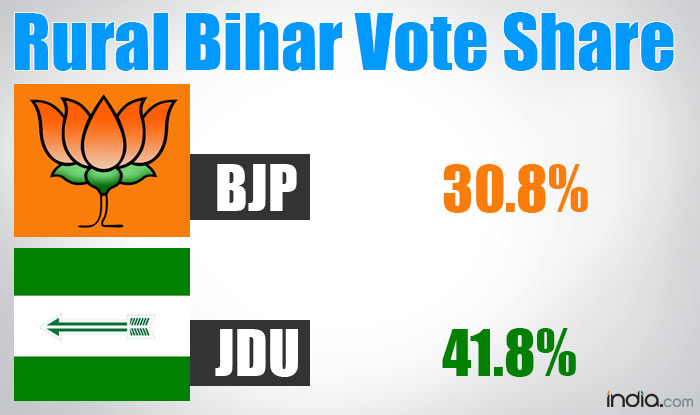 In Bihar, out of the 58 seats won by BJP, only 23 were marked as rural constituencies. On the other hand, the Lalu-Nitish led Mahagathbandhan won 131 rural seats out of the 178 they bagged. Among rural voters, Nitish Kumar’s coalition surged ahead with more than 10 percentage points. However, urban Bihar voted strongly for BJP. The most resounding mandate for the saffron outfit came from Patna, where the party won both legislative seats. The urban voteshare of BJP was 3 percentage points more than JDU+. 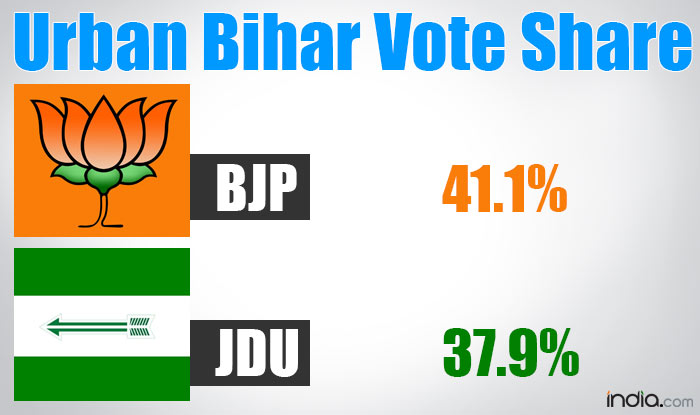 Similar outcome was seen in the Gujarat civic polls. Although BJP swept in urban areas, it faced an upset rural counterpart of the state. in the Congress won 2,548 district talukas, whereas the BJP won only 2,017, down from their 2010 tally of 2,460. Among district panchayats, Congress suceeded in capturing 21 of the 30 institutions. 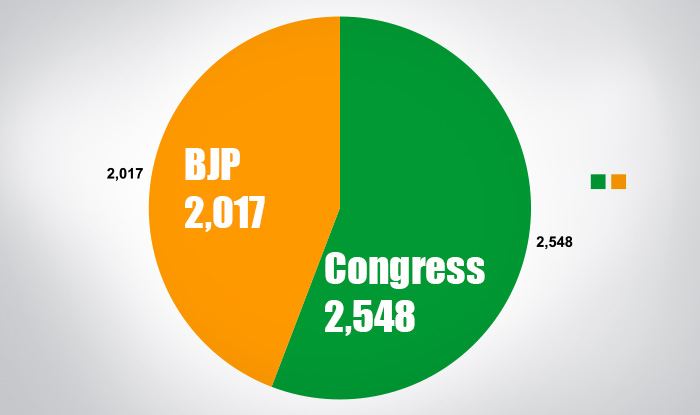 In the rural-district level polls conducted in Maharashtra in January, Congress staged a massive comeback winning 107 of the 280 seats. On the otherhand, BJP was reduced to mere 24 constituencies.

Panchayat elections are not fought on party tickets, but the candidates are backed by particular political outfits. In Prime Minister Narendra Modi’s own constituency of Varanasi, BJP-backed candidates suffered a humiliating defeat. Out of 58 seats, BJP lost 50. In panchayat elections conducted in 28 talukas falling in Home Minister Rajnath Singh’s constituency Lucknow, only 4 seats were won by the saffron party.

Interestingly, BJP had captured 52 per cent rural votes in Uttar Pradesh during the 2014 general elections. According to agricultural expert and political commentator Ashok Gulati, farmers had strongly rallied behind Modi when he promised that if he comes to power, the Minimum Selling Price (MSP) would be raised by 150 per cent. However, BJP government, now has no intention of living up the promise. In response to a PIL filed by noted advocate Prashant Bhushan in the Supreme Court, Centre categorically replied that providing 150 per cent of the MSP is practically unfeasible.

Road map ahead for BJP

The spree of kisaan rallies addressed by the Prime Minister lately and the introduction of Pradhan Mantri Fasal Beema Yojana, along with increase in allocation for the farming sector are part of a concentrated approach to reclaim the rural electorates who have turned away from the saffron party due to it’s non-compliance with the promises made ahead of the 2014 general elections.

How important is the rural votebank for the BJP?

The middle class urban, semi-urban population amounts to only 22 per cent of the nation’s population. In order to ferment it’s stronghold in the nation’s polity, BJP needs to reclaim the voters who are more concerned with bijli, paani, sadak rather than IT hubs, double-digit growths and foreign relations. These middle-class voters are also the ones who fan the politics of caste and religion. With their primary needs fulfilled, electorates of this section turn victims of identity politics and repeatedly fell either into the Hindutva trap of Sangh Parivaar or victimhood politics of secular brigade. On the otherhand, the distressed rural population have been long standing in the queue waiting for vikaas to reach their doorsteps.