Vice-President Hamid Ansari today said promotion and embedding of science and scientific temper in citizenry is a constitutional duty, apart from being a moral one, "if we are to emerge as a modern, progressive nation. 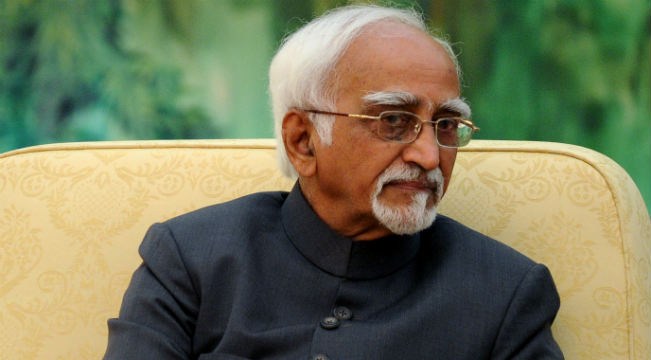 Also Read - 'First a Job, Then a Woman to Get Married': Hamid Ansari Vows to Move on With Life

Bengaluru, May 22: Vice-President Hamid Ansari today said promotion and embedding of science and scientific temper in citizenry is a constitutional duty, apart from being a moral one, “if we are to emerge as a modern, progressive nation.” Poverty, hunger, disease, ignorance, superstition and obscurantism are impediments that exist in our society, he said while inaugurating the 15th All India People’s Science Congress here. (Also read: Vice President Mohammad Hamid Ansari extend greetings on Buddha Purnima) Also Read - Hamid Ansari, Released From Pakistan Jail After 6 Years, Returns to India

“In fact, the latter three impede the eradication of the first three. In other words, to fight poverty, hunger and disease, we need to overcome ignorance, superstition and obscurantism,” he said. “The obvious instrumentality is education. At one level, it overcomes ignorance in a formal sense. But does it address itself to superstition and obscurantism? The answer is in the negative; the reason, regrettably, is to be found in ideologies and social belief and practices that prevail in various segments of our society,” the Vice-President said. Also Read - Indian National Hamid Ansari Returns to India From Pakistan After Six Years of Imprisonment; to Meet EAM Sushma Swaraj Tomorrow

“The socio-economic health of a nation now depends, more and more on, among other factors, the health of the state of its science and technology,” he said.The four-day biennial event was inaugurated in the presence of Karnataka Governor Vajubhai Vala, eminent scientist C N R Rao and former ISRO Chairman U R Rao.