The Congress has been stepping up its attack on the government over Rafale deal controversy which took a new turn last week after former French president Francois Hollande said that France was given “no choice” in selection of the Indian partner for Dassault and the Indian government proposed the name of Reliance Defence as offset partner for the French aerospace giant.

New Delhi: Home Minister Rajnath Singh on Thursday launched a scathing attack on Rahul Gandhi and said that the Congress president will end up being ‘Ra-fail’ in his endeavour to ‘mislead’ people on the Rafale deal.

“It is not Rafale…It is Ra-fail (Rahul-fail)…He will be a failure. Rahul Gandhi knows the truth about the Rafale deal but is trying to mislead the people on the issue,” Singh told a meeting of the Kerala state council of the BJP.

Strengthening his attack further, he asked the Congress leaders to advise Gandhi against using ‘derogatory’ language to target the prime minister, an apparent reference to his ‘chor’ (thief) jibe at PM Narendra Modi.

Earlier in the day, the Gandhi scion took to Twitter to take a swipe at Prime Minister Narendra Modi with a poem in Hindi alleging that he gave benefits to ‘crony capitalists’ at the cost of state-run Hindustan Aeronautics Limited in the Rafale deal. He also alleged that the officer who raised questions over the deal was penalised, while those who sided with the government were rewarded. 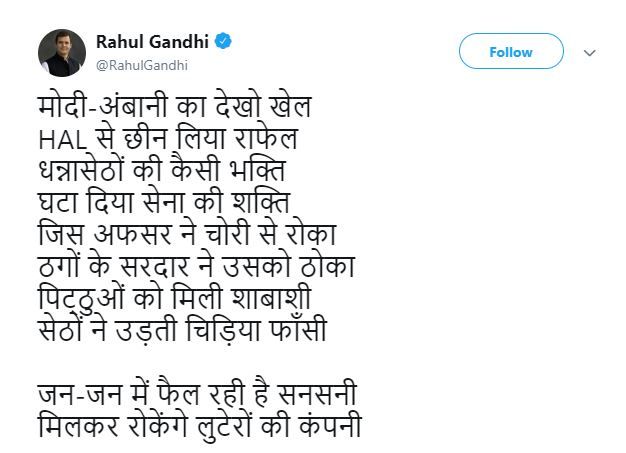 Govt of India says that since Rafale deal was a secret pact the price can't be revealed. When French President was here I met him and asked if there is a secret pact on the price? He said no, if PM Modi wants to reveal he can do so: Congress President Rahul Gandhi in Chitrakoot pic.twitter.com/QfdCXtVfA3

The Congress has been stepping up its attack on the government with the Rafale deal controversy taking a new turn last week after Francois Hollande, who was French president when the Rs 58,000 crore deal was announced, was quoted as saying by French publication Mediapart that France was given “no choice” in selection of the Indian partner for Dassault and the Indian government proposed the name of Reliance Defence as offset partner for the French aerospace giant.