Congress president Rahul Gandhi on Friday launched yet another attack at Prime Minister Narendra Modi over Rafale fighter jets deal while alleging that he created a cobweb just like the Bollywood villain Mogambo to 'loot' the armed forces.

Sharing a news report alleging that the Rafale deal was against the Defence Ministry’s interests, he tweeted, “The Rafale scam is only a glimpse of Modiji’s adventures. To loot the armed forces, he created a cobweb just like Mogambo of selected officers, ministers and industrialists. The threads of this cobweb to make the armed forces hollow from inside are connected to Modiji and his industrialist friends. Now many masks would be exposed.” Also Read - International Travel All Set to Resume For Vaccinated Tourists, Singapore And Malaysia Still Hesitant

The Congress party and its chief have left no stone unturned in launching an offensive on PM Modi and his government, alleging corruption and favouritism in the Rs 58,000-crore fighter jet deal for purchase of 36 Rafale aircraft from France’s Dassault Aviation, a charge the government has strongly denied. Also Read - G7 Summit Updates: PM Modi to Address 2 Crucial Sessions Tomorrow 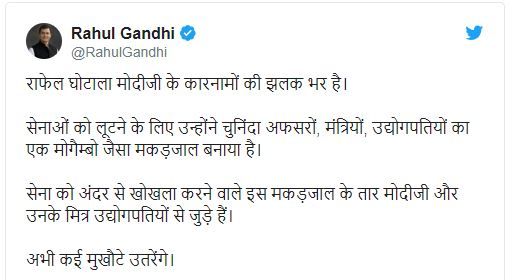 Meanwhile, addressing a rally in poll-bound state of Madhya Pradesh on Friday, he said the Prime Minister has brought shame to word “chowkidar” (watchman).

The Congress president, who often uses the word ‘chowkidar’ in reference to the Prime Minister, said that the situation is such that whenever the word is uttered people immediately respond and say ‘chor hai’ (is a thief).

Elaborating on this, Gandhi said: “Wherever you go and say the word “chowkidar”, there comes a reply “chor hai”. I want to apologise to the chowkidars of the country because it is not your mistake, you all are not thieves, you all are honest and hardworking. Only one person has brought disgrace to you. The Prime Minister of the country has defamed all the chowkidars”.