New Delhi, November 21: Congress Vice President Rahul Gandhi is all set to take the charge from his mother and party president Sonia Gandhi and lead from the front. He has already started building his

New Delhi, November 21: Congress Vice President Rahul Gandhi is all set to take the charge from his mother and party president Sonia Gandhi and lead from the front. He has already started building his team and many organisational changes were witnessed in the last few months. Many young leaders have been given key posts and some were made state presidents.Also Read - ‘Stop Talking About Secularism’: Amarinder Singh Slams Congress, Questions Alliance With Sena

Recently, Dr Ajoy Kumar was named as the Jharkhand unit chief and Alamgir Alam as the Congress Legislature Party leader in the state. The Congress vice president also approved a list of five zonal coordinators, seven organisational and election-related committees of the state unit. Also Read - Priyanka Gandhi Vadra Promises Smartphones, Scooty to Girls in UP if Party Comes to Power in 2022 Assembly Elections 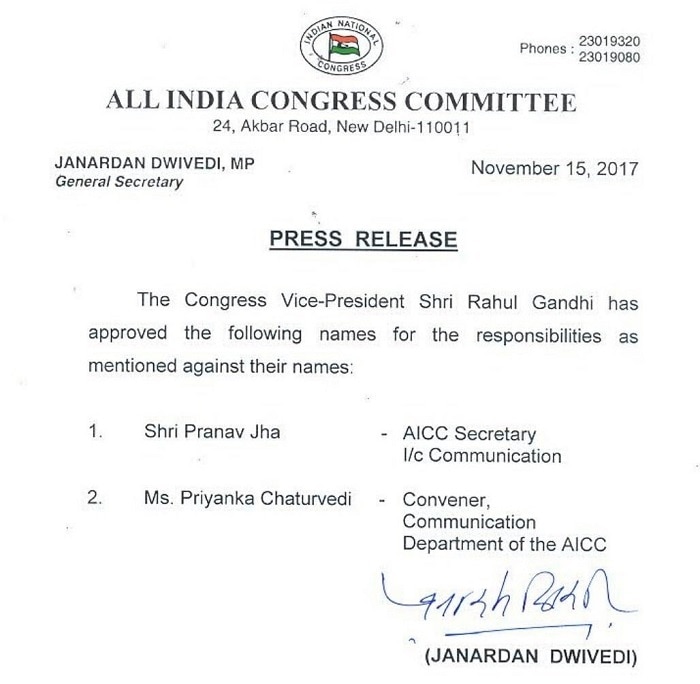 Ahead of Gujarat Assembly elections, former Rajasthan chief minister Ashok Gehlot was appointed as general secretary in-charge for the state in place of Gurudas Kamat. In April, senior Congress leader Digvijaya Singh was removed as party’s general secretary in-charge Karnataka and Goa. Despite winning more number of seats that the BJP, Congress failed to form the government in Goa earlier this year. Congress secretary A. Chella Kumar was made in-charge of Goa replacing Digvijaya Singh.

In another reshuffle, KC Venugopal was appointed as general secretary in-charge for Karnataka along with four secretaries. The Congress also relieved Digvijaya Singh as AICC in-charge of Telangana and named RC Khuntia as state in-charge and Satish Jarkiholi as AICC Secretary.

The Amethi MP is also busy picking names of candidates for Gujarat Assembly elections. Rahul, who has often been portrayed as a “reluctant”  politician by the Opposition, has been actively campaigning in poll-bound Gujarat.  He has reached out to young leaders of the state — Dalit leader Jignesh Mevani, OBC leader Alpesh Thakor and Patidar leader Hardik Patel — to unitedly take on the BJP.

In October, Divya Spandana, also known as Ramya, took over the Congress’s social media cell from Rohtak MP Deepender Singh Hooda. There has been a major overhaul in the party’s image ever since she took the charge giving a new energy to the party’s digital war-room. She was also handpicked by Rahul.

Apart from working on making structural changes in the party, Rahul is also reaching out to allies. He recently took Rashtriya Janata Dal leader Tejashwi Yadav out for lunch. In June, Rahul met its ally and veteran DMK leader M Karunanidhi.

Major challenges ahead for Rahul

The 130-year-old political party is facing turbulent times after having lost consecutive state Assembly elections since 2014 Lok Sabha polls. The party has only 45 MPs in the 543-member Lok Sabha and has been struggling to counter the ‘Narendra Modi wave’. It has already lost Uttar Pradesh and Uttarakhand to the BJP and failed to form the government in Manipur and Goa even after emerging as the single largest party.

The year 2018 will witness elections in major states — Karnataka, Madhya Pradesh, Rajasthan, Odisha, Meghalaya, Mizoram, Nagaland, Tripura, Chhattisgarh. Presently, the Congress is ruling Karnataka, Meghalaya, Mizoram. The BJP, on the other hand, is in power in Madhya Pradesh, Rajasthan and Chhattisgarh. One of the challenges for Rahul is to win maximum states in 2018 state polls and the results would also set the tone for the 2019 next general elections.