New Delhi, Dec 16: Rahul Gandhi formally took over as the President of the Indian National Congress on Saturday after months of speculation. Although the former Congress Vice-President's elevation was

New Delhi, Dec 16: Rahul Gandhi formally took over as the President of the Indian National Congress on Saturday after months of speculation. Although the former Congress Vice-President’s elevation was already declared on December 11 after the organisational poll process, his formal office-taking ceremony was scheduled for today. He has taken over Congress’s reins from his mother Sonia Gandhi, who had held the post for 19 years.Also Read - New COVID-19 Variant 'Serious Threat', Bad Vaccination Figures Cannot Be Hidden: Rahul Gandhi

Speaking at the event, Rahul Gandhi narrated Congress‘ contribution to the nation. He also censured Prime Minister Narendra Modi and said, “Congress took India to 21st century, but the PM, today, is taking us back to the medieval times.” Commenting on the state of politics in India he said, “Many of us are disillusioned by politics of our time. Today, politics is devoid of kindness and truth.” “Politics belongs to the people, but today politics is not being used for people. It is not being used to uplift people, but to crush them,” he added. (ALSO READ – Rahul Gandhi Takes Over Congress Reins From Sonia Gandhi; Twitter Reacts) Also Read - Major Setback to Congress in Meghalaya: Former CM Mukul Sangma, 11 Other MLAs Join TMC

“We are now being compelled to imagine that businesses can be built without harmony that only one man himself is the voice of reason. Expertise, experience and knowledge can be cast aside for personal glory,” the new President said. “You have an example in front of you, once fire breaks out it is difficult to douse it, that is what we are telling the people of BJP, that if you set the nation on fire it will be difficult to control. Today BJP has spread the fire of violence across the country.” he added. (ALSO READ – Rahul Gandhi Now Congress President: The Journey of a ‘Reluctant Politician’) Also Read - Congress MLA From Rae Bareli Aditi Singh, BSP MLA From Azamgarh Vandana Singh Join BJP

Stating the role of the Congress workers and leaders, he said, “And if there is anyone who can stop what the BJP is doing, it is the ‘pyara karyakarta & neta’ (dear workers and leaders) of Congress. We are going to make Congress, grand old and young party. We will fight the politics of anger.”

Gandhi said in his address that the Congress considers even the members of BJP as its own siblings, but does not agree with their techniques. “We consider the BJP as our brothers and sisters, but we do not agree with them. They crush voices but we allow them to speak, they defame we respect and defend.” he said. (ALSO READ – Manmohan Singh Takes a Dig at BJP, Backs Rahul Gandhi to ‘Transform Politics of Fear’ Into ‘Politics of Hope’)

“Congress is an ancient idea. BJP would have you believe they are oldest idea in the universe,as usual this is not the truth.In India, there are two ideas that have clashed, idea of self vs the other. BJP are soldiers fighting for self. Congress guided by service of community,” he said.

Accepting the position, he said, “It is with deepest humility, that I accept this position (of Congress President) knowing that I will always be walking in the shadow of giants.” 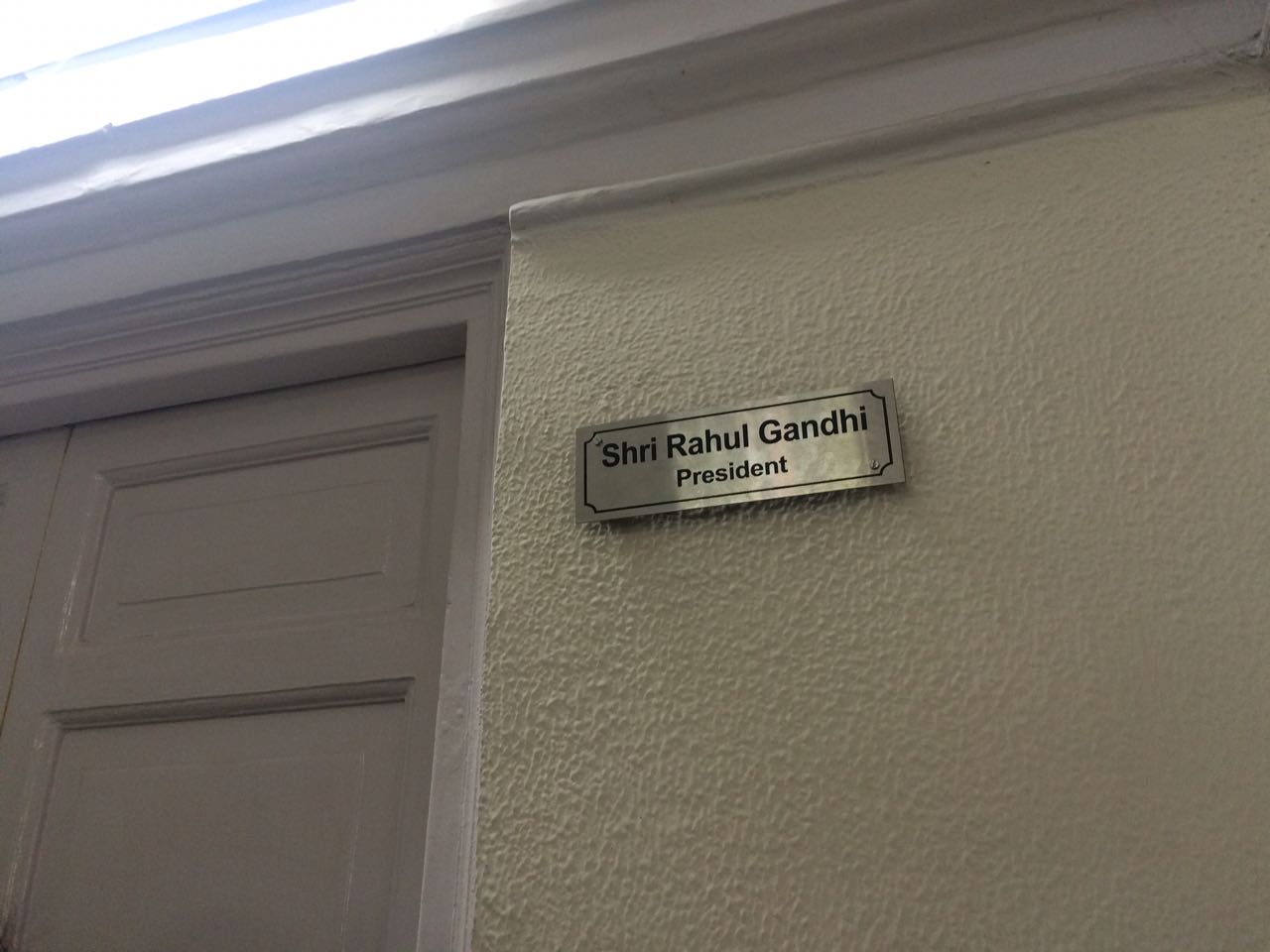 Celebrations took place at full swing at the party headquarters in New Delhi, with Senior leaders, along with party workers crowding at the venue. Rahul Gandhi’s supporters raised slogans claiming he can be the Prime Minister of India. “Desh ka PM kaisa ho, Rahul Gandhi jaisa ho,” the supporters said.

Speaking at the event, former Prime Minister Manmohan Singh said, “Now that Sonia Ji is handing over reins of the party to Rahul Ji we salute Sonia Ji for uniting the leadership, something that she has been doing since 19 years. Rahul Ji brings a new sense of dedication and commitment.”

Former party president and Rahul Gandhi’s mother, Sonia Gandhi in her address said, “Before I start my address, I congratulate and bless Rahul Ji for taking charge as Congress President.” She talked of her initial days when Indira Gandhi led the party and said, “Indira Gandhi treated me like her own daughter and I learnt a lot about India from her.”

“Our country’s foundation and shared traditions are being attacked, there is an environment of fear,” she further said amid the noise of firecrackers.

About the new leadership, she said, “Rahul is my son, so I do not think for me to praise him is right but I would say that since childhood he had to bear the brunt of violence, after joining politics he had to face blatant personal attacks, that have made him a stronger person.”

As per sources, the Akbar road towards the Congress headquarter has been closed keeping view the security concerns.

Priyanka Gandhi Vadra and Robert Vadra were also present at the event. However, reportedly they were sitting among party workers and not the Senior leaders.

Earlier today, Congress leader Sachin Pilot said party president-elect Rahul Gandhi had always been a unanimous choice of the lakhs of workers across India and would infuse a new energy into the party. 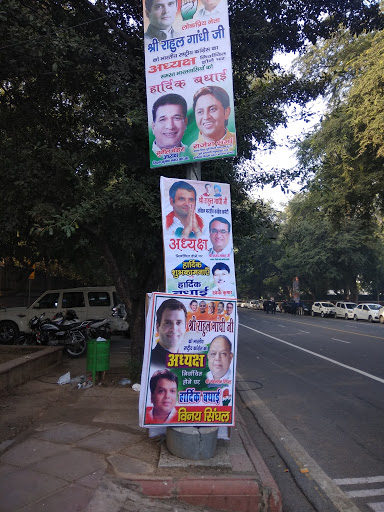 All along the road leading to the Congress headquarters, posters congratulating Rahul Gandhi were put up to mark the celebrations. 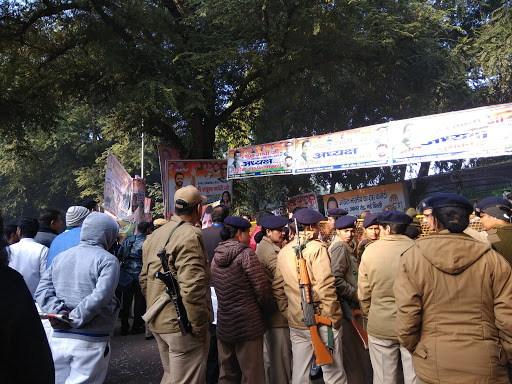 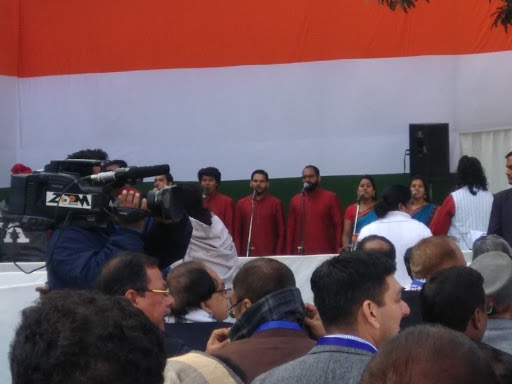 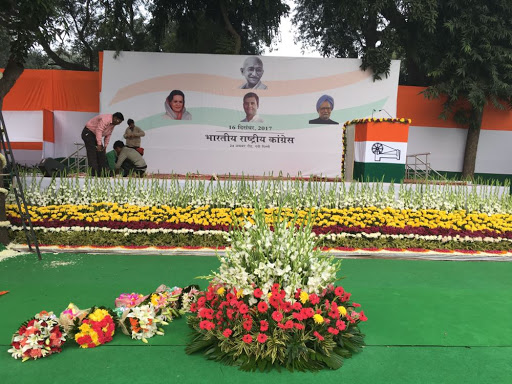 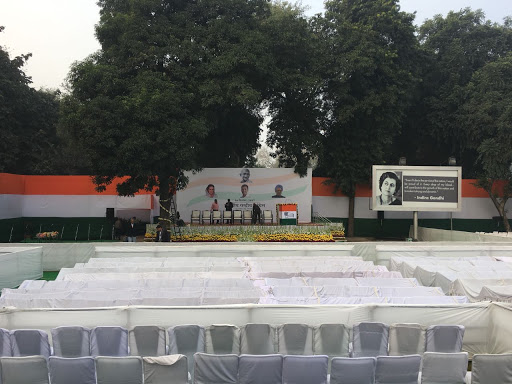 He also stated that in 2019 Assembly elections, the Congress would remain the only party to challenge the Bharatiya Janata Party (BJP) nationally, which it even now it is.

Assam MP and son of former Assam CM, Gaurav Gogoi tweeted calling it a ‘pivotal’ ceremony after reaching the headquarters.

A pivotal moment for a party that has always served India and believe that We the People have the power to shape our future. #CongressPresidentRahulGandhi .Thank you to Madam Sonia Gandhi for being the source of strength for the party and we will need your guidance. @OfficeOfRG

47-year-old Gandhi will formally take over the reins of the grand-old party two days ahead the counting of votes for Gujarat and Himachal Pradesh Assembly elections. His major challenge still remains the revamping of party organisation, apart from electoral battles in the run-up to the 2019 Lok Sabha polls.