Rubbishing the BJP's claim, the Congress said that similar jackets can be purchased for Rs 700. "I can show you the same jacket for Rs 700," Congress leader Renuka Chowdhury said while laughing off the matter.

New Delhi, Jan 31: Congress president Rahul Gandhi on Wednesday sought to bury the controversy surrounding his black Burberry jacket, saying it was gift. Hours after the Meghalaya unit of the Bharatiya Janata Party (BJP) went all out slamming the Congress leader for wearing a Rs 70,000 jacket during a music concert in Shillong, Rahul Gandhi told a television channel that it was gifted to him someone.Also Read - Congress Names Charanjit Singh Channi As Next Punjab CM: All You Need To Know About Amarinder Singh’s Successor

Rahul, however, didn’t disclose who gifted him the ‘costly’ jacket. Also Read - Who Is Sukhjinder Singh Randhawa, Likely To Succeed Amarinder Singh As Next Punjab CM

Rubbishing the BJP’s claim, the Congress said that similar jackets can be purchased for Rs 700. “I can show you the same jacket for Rs 700,” Congress leader Renuka Chowdhury said while laughing off the matter. (Also Read: When Rahul Gandhi Helped Passengers Place Luggage Onboard Delhi-Guwahati Flight)  Also Read - 'Congress to Contest UP Assembly Election Solo Under Priyanka Gandhi's Leadership'

Navjot Singh Sidhu also came out in support of his party president, saying “never seen a man like Rahul bhai who lives such a simple life while sitting on such important post”.

“Did they went to see the bill when Rahul Gandhi was buying the jacket? How do they know? I have never seen a man like Rahul bhai who lives such a simple life while sitting on such important position,” Sidhu, who was earlier in BJP, said.

Hitting back at the Congress president using the now famous ‘suit-boot’ jibe, the BJP’s Meghalaya unit earlier claimed that the cost of the black jacket that Rahul Gandhi wore during a music concert on Tuesday night was nearly Rs 70,000. The party tweeted a photo of Rahul Gandhi along with one showing the cost of the jacket on one of the online fashion stores.

“So @OfficeOfRG , soot (pun intended!)-boot ki sarkar with ‘black’ money fleeced from Meghalayan State exchequer by rampant corruption? Instead of singing away our woes, you could have given a report card of your inefficient govt in Meghalaya! Your indifference mocks us!” Meghalaya BJP said in the tweet. 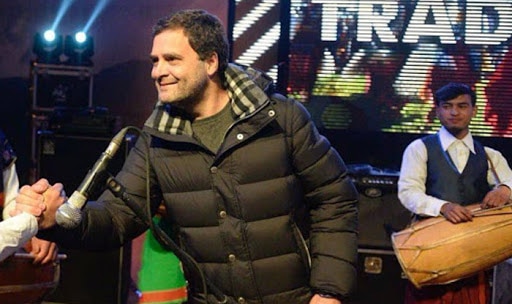 The BJP’s jibe was an apparent response to Rahul’s Gandhi’s ‘suit boot ki sirkar’ remark that the Congress leader made on Prime Minister Narendra Modi for wearing a suit which had his name monogrammed over it during a meeting with the then US President Barack Obama in 2015. The suit was sold for Rs 4.31 crore in an auction later.

#WATCH Congress’ Renuka Chowdhury reacts to BJP’s allegation stating that Rahul Gandhi wore a jacket worth Rs.70,000, laughs and says, ‘I can show you the same jacket for Rs 700.’ pic.twitter.com/8JHCrHbw4B

Speaking at the event, Rahul Gandhi made a veiled attack at the ruling BJP accusing it of spreading hatred in the country.

“We are strongest when we stand together in our diversity. India’s strength is our diverse culture and different languages, different ways of thinking. When we fight each other and spread hatred, we are not strengthening our country but weakening it and disrespecting our people, our past and our future,”Rahul Gandhi said. (Also Read: Rahul Gandhi Needs Time, There Will be Reshuffling of The Deck in The Congress Party: Shashi Tharoor)

Meghayala, where the Congress has been in power since last 15 years, is scheduled to hold Assembly elections next month. Voting for 60-seat Meghalaya Assembly will be held on February 27 and results will be declared on March 3.