Reacting sharply to her attack on Rahul Gandhi, Congress today hit back at Smriti Irani alleging that due to "sycophancy" of Prime Minister Narendra Modi the HRD Minister had no time left for her ministry. 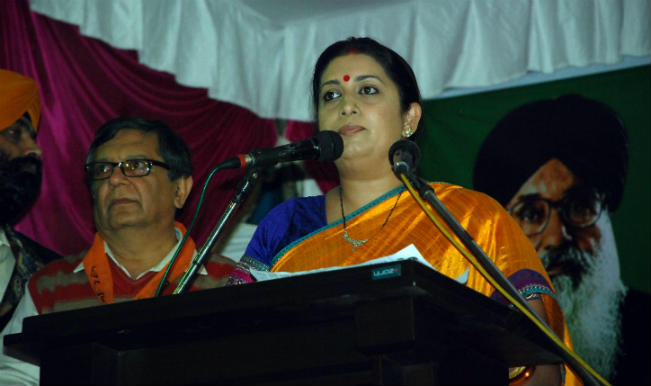 New Delhi, May 29: Reacting sharply to her attack on Rahul Gandhi, Congress today hit back at Smriti Irani alleging that due to “sycophancy” of Prime Minister Narendra Modi the HRD Minister had no time left for her ministry. “She is going to Amethi and making strong statements against Rahul Gandhi to do sycophancy of Modi. So she is not getting time to run the ministry,” AICC general secretary Ambika Soni said at AICC briefing. She alleged that the directors of IITs and IIMs are a harassed lot and there is a controversy in the IIT Chennai. “Instead of giving certificates to others, she should look at how the institutions under her ministry are run,” Soni said. Also Read - Subhra Kundu, Wife of Rose Valley Group Chief Gautam Kundu, Arrested By CBI

NSUI chief Roji M John said that the HRD minister has made a “mockery” of her ministry and her cabinet portfolio is under “threat” and alleged that attacking Rahul Gandhi is her “only survival tactic”. Attacking Irani for daring Rahul for a debate, the NSUI chief raked up the issue of her educational qualification saying considering this she should be “debating a child”. Also Read - Karnataka: Is BJP Planning to End Taluk Panchayat? Congress Questions State's Intention

“Smriti Irani is facing stern opposition from various academicians, vice chancellors, teaching fraternity. She has made a mockery of the HRD Ministry due to which her cabinet portfolio is under threat. She was removed from the BJP National Executive for her non-performance. “Now it is but obvious that attacking Rahul Gandhi is her only survival tactic to keep her bosses, especially the Prime Minister happy,” John said in a statement. He further said,”considering her qualifications, she should be debating a child but then due to her insistence, I challenge her to an open debate. (Also read: Rahul Gandhi vs Smriti Irani: Congress Vice President and HRD Minister involved in flaring battle over IIT-Madras row on Twitter!)

“For someone like her who knows nothing about educational institutions and student movements, I would like to point out that India’s independence was won on the shoulders of the student and youth movement,” the NSUI chief said. Attacking her for calling the NSUI activists “goons”, the Congress student wing chief said,”she needs to issue a public apology for calling student activists, ‘goons’, it is an insult to the student community of the country.”

Gandhi and Irani were today locked in a spat after protests by NSUI workers outside her official residence over de-recognition of a student group by IIT Madras. While Rahul said the de-recognition was aimed at “crushing dissent” and he will fight such attempts, Irani shot back challenging him for a debate on the issue of governance, including education and accused him of fighting his battles hiding behind NSUI.