Rahul Gandhi has been elected as the Congress president. He was elected unopposed as decks were cleared for him to take the charge from his mother Sonia Gandhi.

New Delhi, December 5: Rahul Gandhi has been elected as the Congress president. He was elected unopposed as decks were cleared for him to take the charge from his mother Sonia Gandhi. Rahul filed the nomination papers on Monday for the Congress presidential polls. (ALSO READ – After 19 years as Congress President, Sonia Gandhi Retires: Her Political Journey so Far)Also Read - ‘Stop Talking About Secularism’: Amarinder Singh Slams Congress, Questions Alliance With Sena

Starting his political journey at the age of 34, Rahul always bore the image of a ‘reluctant’ politician but is now seen leading the party in Gujarat Assembly elections.  In the past, he led the party in the state and Lok Sabha polls, but results were not in his favour and the Congress suffered huge defeats. Even when his party formed the government at the Centre for the two consecutive terms, he did not take any ministerial post and decided to work in the party. (Also read: Huge Challenges Ahead for Rahul Gandhi as Congress President) Also Read - Priyanka Gandhi Vadra Promises Smartphones, Scooty to Girls in UP if Party Comes to Power in 2022 Assembly Elections

A look at Rahul Gandhi’s profile: Also Read - UP Police to Take Action Against Women Constables Who Posed for Selfies with Priyanka Gandhi Vadra

The Amethi MP was born on June 19, 1970 to Rajiv and Sonia Gandhi. He attended St. Stephen’s College in Delhi and studied further at Harvard College and Rollins College, Florida, from where he graduated with a Bachelor of Arts. He did M Phil in Development Studies from Trinity College, Cambridge University. Thereafter, he joined the Monitor Group, a strategy consulting group, in London, where he worked for three years. (Also read: What Would Sonia Gandhi’s Role be After Rahul’s Elevation? Here’s What Congress Said)

The Gandhi scion entered the political battleground in 2004 when he contested from the Amethi Lok Sabha constituency in Uttar Pradesh. After being elected to the 14th Lok Sabha, Rahul became the member of the Standing Committee on Home Affairs from 2004 to 2006. He was also elevated to the post of Congress General Secretary in 2007 and was given the charge of the youth and student organisations of the party. (Also read: Rahul Gandhi: A Leader Who Likes to Keep His Personal Life Secret)

From 2007 to 2009, he was the member of Standing Committee on Human Resource Development.

In the next general elections, 2009, he was re-elected to the 15th Lok Sabha. In the same year, he became the member of Standing Committee on Human Resource Development and Consultative Committee on Rural Development.

Rahul had spearheaded an agitation in 2011 from Bhatta Parsaul in Uttar Pradesh against forcible land acquisition of farmers that had culminated into enactment of Land Acquisition, Rehabilitation and Resettlement Act, 2013. 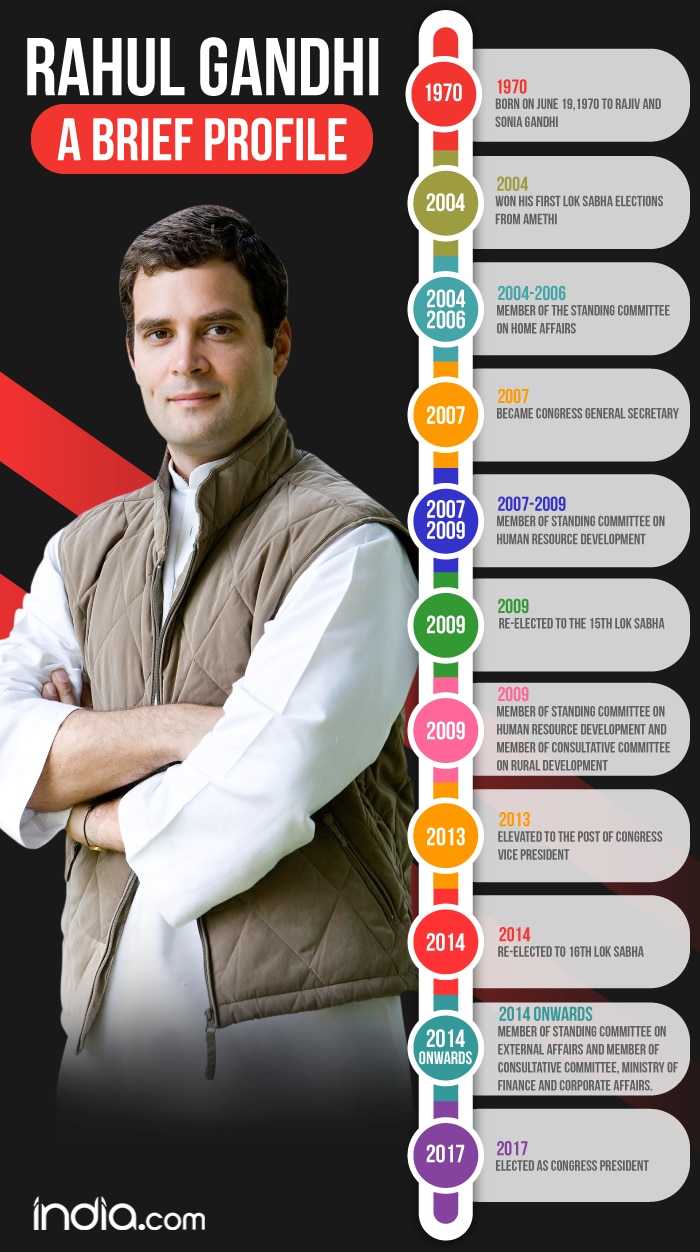 In January 2013 during the Jaipur Chintan Shivir, Rahul was elevated to the post of Congress vice president. In the same year, Congress was mauled in the Delhi Assembly elections as it won 8 seats in the 70-member Assembly where the party has been in power for the last 15 years.

In the 2014 Lok Sabha polls, Rahul was re-elected to the 16th Lok Sabha from Amethi. The party was decimated at the hands of BJP as it just managed to win 44 seats in the 543-member House. Since September 2014, he has been the member of Standing Committee on External Affairs and of the Consultative Committee of the Ministry of Finance and Corporate Affairs.

But in 2015 during the crucial Budget Session, Rahul went missing from action and was on a 56-day sabbatical. Ever since his return, he has been taking on the Modi government and Parliament also witnessed a new Rahul — a matured politician from an angry man, an ‘absent’ MP who raised important issues in the House. He has been leading the party is the consecutive state polls, campaigning aggressively — from padyatras to addressing rallies, reaching out to other opposition parties, but the results did not favour him.