Congress vice president Rahul Gandhi today returned from his self-sabbatical after 56 days. After much speculation about his whereabouts Rahul Gandhi came back to the national capital. Apparently 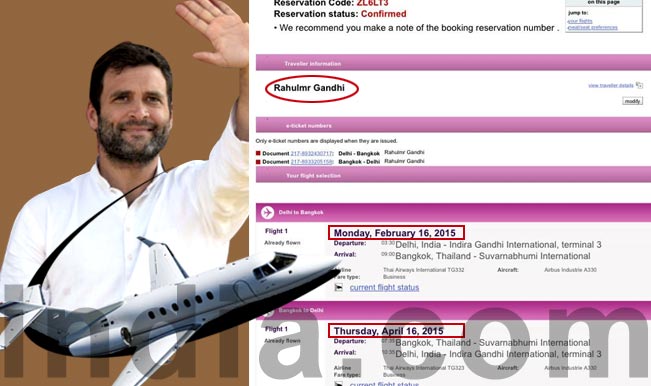 Congress vice president Rahul Gandhi today returned from his self-sabbatical after 56 days. After much speculation about his whereabouts Rahul Gandhi came back to the national capital. Apparently Rahul’s Business Class flight ticket is doing the rounds on social media. The Business Class ticket which is going viral shows that the departure of the plane was on Monday, February 16, 2015 from Delhi to Bangkok. Where as the return flight from Bangkok to Delhi. Also Read - Punjab Cabinet Reshuffle: Who is In, Who is Out | Full List of Probable Ministers Likely to Take Oath Tomorrow

As per the ticket Rahul took the Thai Airways flight TG332 from Indira Gandhi International Airport on February 16 to Bangkok. The return ticket is of Thai Airways flight TG 323 from Bangkok on April 16 Delhi. As per the reports Rahul was in famous meditation retreat centre at Yangon in Myanmar. Also Read - Congress Names Charanjit Singh Channi As Next Punjab CM: All You Need To Know About Amarinder Singh’s Successor

He was seen nowhere since the budget session of parliament that began on February 23. He was welcomed by Congress president Sonia Gandhi and his sister Priyanka at his Delhi home. Post this Congress leader Anand Sharma said that now Rahul Gandhi is back with some proactive measures with dynamism, commitment. (Rahul Gandhi is back! Here are nine funny memes on #RahulReturns)

In a previous case, Rahul Gandhi was seen camping in Uttarakhand when The National vice president, Indian National Trade Union Congress (INTUC), Jagdish kumar Sharma shared pictures of Congress vice president on micro-blogging site Twitter. The picture was shared claiming that the Gandhi scion was not in Bangkok but was in Uttarakhand.

“Rahul Gandhi visits Uttarakhand every year and these are the pictures clicked recently,” Sharma was quoted saying. But now with this particular ticket going viral makes it evident that Rahul Gandhi was indeed in Bangkok for a duration of two months.