Railway track boon for some, bane for others in flood-hit Jammu and Kashmir

The railway track of the Baramulla-Banihal train in Jammu and Kashmir has been a boon for some areas while bane for many others in the flood-ravaged Valley. 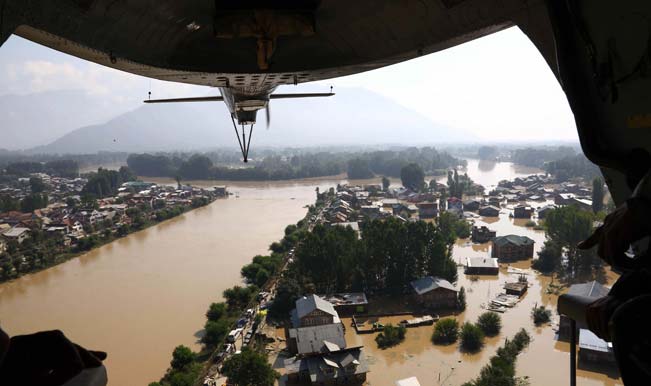 Pulwama (J-K), Sep 21: The railway track of the Baramulla-Banihal train in Jammu and Kashmir has been a boon for some areas while bane for many others in the flood-ravaged Valley. The track built over an around 15-20 feet high embankment at some places has led to blocking of the passage of water thereby flooding some areas while at the same time saving many others from destruction. “Railway is good for the people, but the bund (embankment) built for the track blocked the outflow of water from our village,” Ghulam Nabi Hajam, a resident of Gulzarpora village in south Kashmir’s Pulwama district told PTI. Also Read - 3 dead, Over 19 Lakh Affected Due to Heavy Downpour in Odisha

He said the water level in their village would not have reached as high as 8 to 10 feet, had there been no embankment. “When the waters flooded our village, there was no escape route for it in the absence of any flood channel.The bund stopped it. Had there been no bund, the water would have, no doubt, flown into other villages but could not have caused much damage here,” Hajam said. The residents said the engineers, who built the track, should have left gaps at regular intervals in the bund to allow the passage of waters. “There are small gaps at few places, but those were not enough,” Hajam said. Also Read - Rain Batters Odisha as Bhubaneswar, Puri Receive Record Rainfall

A youth, Parvez Ahmad,expressed the same apprehension about the under-construction four-lane road on the Srinagar-Jammu National Highway. “The road is fine, but there should be gaps in its bund at every half-a-kilometre for allowing water to pass, otherwise we are doomed,” Ahmad said. The residents of Gulzarpora might be cursing the railway track, but for the people in the adjacent villages, it acted truly as a blessing?when the floods hit these areas in south Kashmir on September 5.