As per the list, while Pandit Kishan Chand Sharma has been chosen to contest from the Dholpur seat, Ramhet Kushwaha has been fielded from Bari constituency.

As per the list, while Pandit Kishan Chand Sharma has been chosen to contest from the Dholpur seat, Ramhet Kushwaha has been fielded from Bari constituency. The party has earlier released a list of 11 candidates contesting in Rajasthan assembly polls. 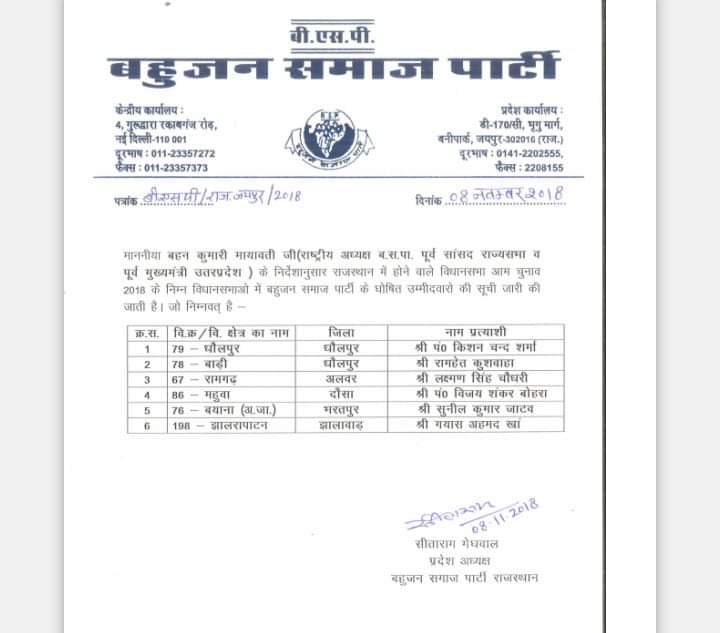 The party had earlier ruled out its alliance with the Congress party in the Rajasthan Assembly Elections 2018, saying that the party would rather fight alone than begging for seats in a coalition. Also Read: Just Before Poll Conduct Imposition, Raje Announces Free Electricity For Farmers

A BSP statement had said that the party will never compromise with the self-respect of the Dalits, tribals, backward, Muslims, other minorities and the upper castes’ poor, irrespective of the “malice and torture” of the governments run by the Congress and the Bharatiya Janata Party (BJP).

Accusing the Congress of finishing her party, Mayawati had on October 3 ruled out an alliance with the Congress in the coming Assembly elections in Rajasthan as well as in Madhya Pradesh, a decision that could also impact the opposition’s plan for a grand alliance against the BJP in the 2019 Lok Sabha polls.