Rajdeep Sardesai slapped at Madison Square Garden: The senior journalist should come out with a public apology!

The videos that have surfaced on YouTube clear the air that it was indeed Rajdeep who provoked the crowd. 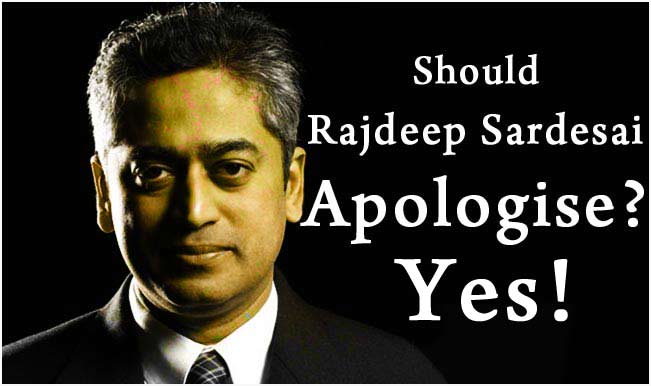 While one’s chest bloated with pride when Prime Minister Narendra Modi delivered his 70-minute speech at the Madison Square Garden, outside there was a shambolic display of undignified Indian representation by senior journalist Rajdeep Sardesai. On the one hand, everyone was happy to see the Indian national anthem being played on foreign soil amid huge fanfare, on the other, the former CNN-IBN Editor disappointed his own country finding himself in a physical altercation. But all this melodrama for what, Rajdeep, mere publicity of a book? Also Read - Shaheen Bagh's 82-Year-Old Bilkis Named in Time Magazine's List of 100 Most Influential People

A quick look at the whole fiasco: Also Read - PM Modi to Hold High-level Meeting With CMs of 7 States/UTs Today | What to Expect

Several videos surfaced on social networking site YouTube which showed that Rajdeep Sardesai was heckled by the crowd at Madison Square Garden in New York. Rajdeep himself took to Twitter to present his side of the story. He tweeted, “Great crowd at Modison square garden! Except a few idiots who still believe abuse is a way of proving their machismo! Glad we caught the idiots on cam. Only way to shame the mob is to show them.” Read his tweets here:

Great crowd at Modison square garden! except a few idiots who still believe abuse is a way of proving their machismo! #ModiAtMadison

Glad we caught the idiots on cam. Only way to shame the mob is to show them. #ModiAtMadison

Other versions of the videos of the incident made it evident that it was Rajdeep Sardesai who asked whimsical questions to the cheery crowd who were rooting for Prime Minister Narendra Modi after his motivating speech at Madison Square Garden. Even being one of the most senior journalists in the country, Rajdeep was seen losing his temper because of his mistake – asking frivolous question to garner some TRPs.

The videos that have surfaced on YouTube clear the air that it was indeed Rajdeep who provoked the crowd.

In fact, after the incident, the senior journalist didn’t waste any time in mentioning that he got good publicity for his book. Who would post such an immature tweet after a historic address by his country’s Prime Minister in the same premises he was standing in? Well, Rajdeep Sardesai just did that. Read his tweet here:

Great publicity for my book. All those who took selfies have promised to buy it! #ModiAtMadison

Instead of clearing the controversy and apologising for his undignified actions, Rajdeep Sardesai chose to tweet about his book. One can only imagine that if the same actions were committed by a politician, would he let them go free just like that? There would have been a huge controversy with the clips being shown umpteen times on news channels.

How could a senior journalist call a person a**hole and expect nothing in return? Rajdeep Sardesai’s quote, “People have more money, but no class,” also seemed to be the cause of this scuffle.

It will be good for the Consulting Editor at India Today Group if he comes out with a public apology. Not only did he shame himself but also the nation, at a time when the world was watching us with eagle eyes. For a journalist to lie and to display sheepish behaviour is simply not acceptable from a person of Rajdeep Sardesai’s stature. Had he not instigated the inglorious questions, our questions would have been entirely different.

In a nutshell, Rajdeep Sardesai should apologise for his infamous fist-fight before Narendra Modi’s speech at Madison Square Garden, big time!