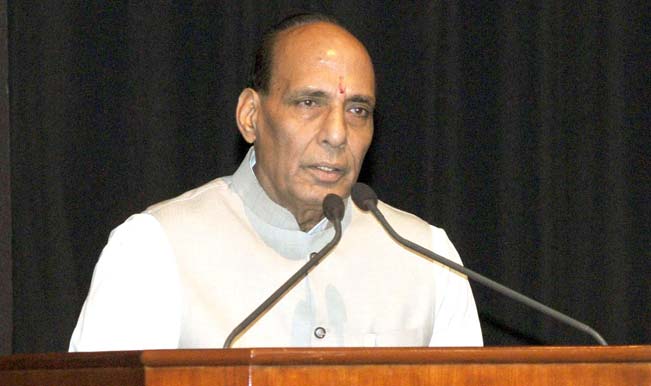 Jammu, May 27: Attacking the previous Congress-led UPA government, Union Home Minister Rajnath Singh said it suffered from policy paralysis and credited Narendra Modi of taking the country from inactive to active mode. “During the UPA rule there was a policy paralysis in the country. Congress government took years to decide on defence deal, whereas, in the last one year Narendra Modi dispensation has cleared 40 defence proposals,” Singh said while addressing reporters here today. Lauding Prime Minister Narendra Modi of taking the country from ‘inactive mode’ to ‘active mode’, he said, “in the past one year, the country has come to active mode from inactive mode. Unlike Congress, which was in inactive and silent mode for the past ten years, Narendra Modi government has been in active mode from the very first day it came to power.” (Also read: Rajnath Singh: Open for dialogue with anyone, within constitutional framework) Also Read - Breaking News January 18 Updates

Claiming that there was not a single charge of corruption against the Modi government, Singh said the Congress-led UPA government was marred with large scale corruption. “Congress government was victim of policy paralysis, our government brought transparency in decision making. While Congress-led UPA was marred with so many charges of corruption there was not a single one against our government since it came to power a year ago,” he said, adding that the BJP-led NDA government at the Centre was committed to provide clean governance to the people of the country. He said, the defence preparedness, in the past one year, has received a boost with government clearing 40 new projects that were pending for approval during the previous regime for several years. Also Read - Connecting India: PM Modi Flags Off 8 Trains to Statue of Unity | Check Full List, Routes And Timings Here

Singh said several measures taken by the Prime Minister has helped in improving India’s image on the global platform. “It was because of the new government’s positive outlook that not only domestic but also foreign investors were feeling secure to invest in India. “Till now the FDI has increased by USD 28 billion. Investors from outside and within the country are feeling safe to invest in the country,” Singh said. The Union Home Minister, who was highlighting achievements of one year of NDA rule, also said that the Modi government’s ‘Make in India’ initiative was not only aimed at bringing a manufacturing revolution in the country but also to help eradicate the problem of unemployment.

Elaborating further, he said India will welcome the FDI and also have an upper hand, as the government would control the 51 per cent share in it.Be it the company from America or Germany, whatever they
manufacture in India would be ‘Made in India’ and the products would be of world class quality that people would be ready to purchase,” Singh said. He said Modi has given a confidence of good governance and a new dimension to the country’s development. “Since the Narendra Modi government took over, there has been 27 per cent increase in power generation in the country. Apart from power generation, development of the highways too have taken place,” Singh said, adding while in 2013-14 only 3,621 km of highway was constructed but it has gone upto 7,980 km in 2014-15,” he said.

Besides, there has been an growth of 46 per cent under the ‘Prime Minister Gram Sarak Yojna’, he added. The Home Minister said that the world has also accepted that after China, India was one of the fastest growing economies. “Even in G-20, India has emerged as the fastest growing economy.” He said Narendra Modi government has taken major steps to bring back the black money stashed abroad and made the welfare of the poor and the farmers as its priority. “Schemes like Jan Dhan Yojna, social security schemes have connected the poor and downtrodden with the banks. Even the IMF has also appreciated this, and Jan Dhan Yojna has found place in the Guinness Book of World Records,” he said.

He said while the inflation and price rise was ‘sky-high’ during the UPA government, the new government has not only brought it under control but has reduced the prices of essential commodities. “Consumer price index which stood at 8.48 per cent during Congress rule has now been brought under 4.87 per cent,” he said. Singh said that Indian government has offered the benefit of reduction of global petroleum prices to the consumers. “Our opponents say that prices have reduced as the global petroleum prices have reduced, then the same must be applicable to other countries as well, while the prices in India have come down, it continues to be the same in other countries,” he said. Singh said the country’s GDP was stagnant at 5 per cent during the Congress rule, but now has come to 7 per cent while the fiscal deficit has also come under control.