As waving of Pakistani flags at rallies by separatists become frequent, the Centre today said it will not tolerate such incidents and that those involved will be severely dealt with. 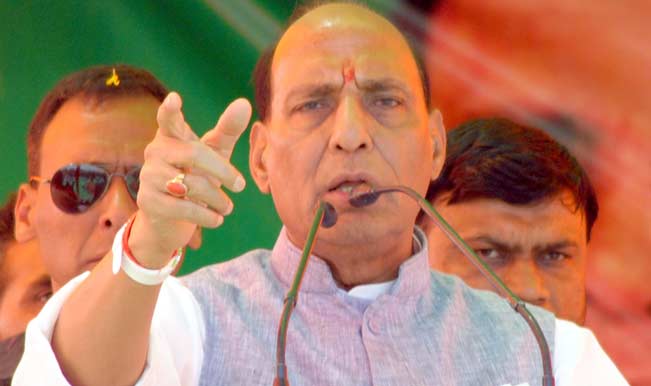 Jammu, May 27 : As waving of Pakistani flags at rallies by separatists become frequent, the Centre today said it will not tolerate such incidents and that those involved will be severely dealt with. Union Home Minister Rajnath Singh while sending this warning at the same time said the Centre was ready to talk to everyone in Jammu and Kashmir. Singh also appealed to the youth of Kashmir Valley not to get influenced by the separatists and avoid raising pro- Pakistan slogans and waving of Pakistani flags. (Also read: Rajnath Singh: Narendra Modi brought country from silent to active mode) Also Read - Samajwadi Party Will Support Mamata Banerjee's TMC In Upcoming West Bengal Polls, Confirms Akhilesh Yadav

“We are ready to talk to everyone. Democracy is all about keeping open the communication lines, but we won’t tolerate anybody raising pro-Pak slogans and raising Pakistani flags on Indian territory. They will be severely dealt with,” Singh said while addressing the Jan Kalyan Parv function here. Singh said the state government has been asked to take strong action against people who raise pro-Pakistan slogans and wave Pakistani flag. “The Jammu and Kashmir government has been acting on this direction.” The Home Minister said he feels pained to see the youth of the state, especially of Kashmir, being misguided. Also Read - From West to East: Maharashtra’s Ruling Shiv Sena to Contest West Bengal Polls This Year

Later while addressing a press conference Singh said the youth should boycott the people who raise pro-Pakistan slogans and wave Pakistani flags in the Valley. “The youth must not come under the influence of those handful of misguided people who want to misguide others as well.” He appealed to the youth to give an opportunity to the government to work for them as it was ready to hold dialogue with everyone. “There is a process those who want to hold dialogue are welcome and we are ready to hold talks with them, they must talk to the elected government in the state first and then if need be they can talk to us as well,” he said. He said separatists were playing with the emotions of the youth of Kashmir and that the youth must come forward and take part in constructive activities.