LJP president Ram Vilas Paswan today said his party would back ally BJP's choice of chief ministerial candidate in Bihar assembly polls which are likely to be held in September-October this year. 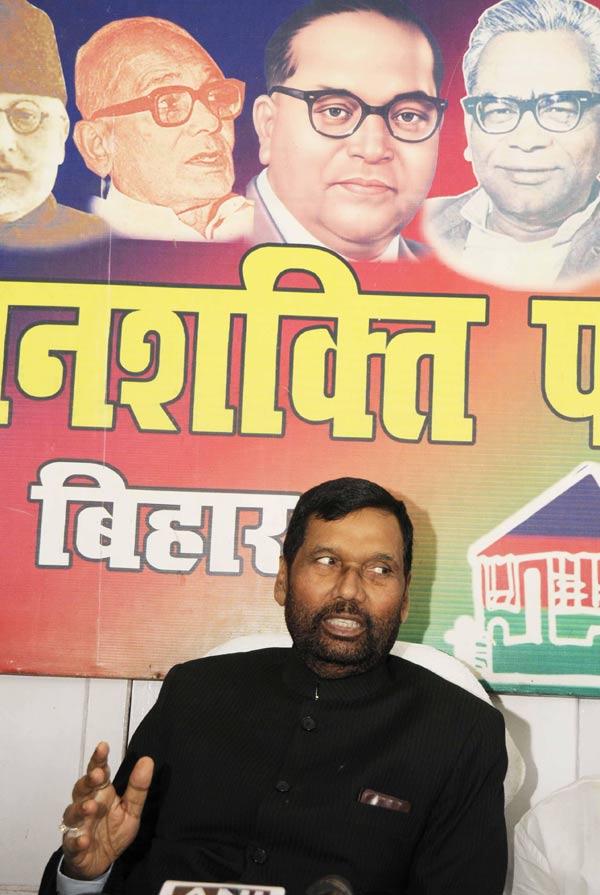 New Delhi, May 20: LJP president Ram Vilas Paswan today said his party would back ally BJP’s choice of chief ministerial candidate in Bihar assembly polls which are likely to be held in September-October this year. He also made light of the merger of ‘Janata Parivar’, aimed at putting up a joint fight by Bihar Chief Minister Nitish Kumar’s JD(U) and Lalu Prasad’s RJD against BJP, saying it was the first party which does not have any name or symbol. (Also read: Nitish Kumar questions Ramvilas Paswan’s new love for Narendra Modi) Also Read - Subhra Kundu, Wife of Rose Valley Group Chief Gautam Kundu, Arrested By CBI

The merger has hit a roadblock and Kumar and Prasad are likely to contest the election as allies. Paswan, a minister in the Modi government, however, insisted that both leaders would not be able to come together. “Now there will be a fight among RJD, JD(U) and Congress over seats. This merger is impossible,” he told reporters and expressed confidence that the BJP-led NDA will get a majority in Bihar. Asked about the chief ministerial candidate, he said, “LJP has already said it depends on BJP. We are not into this debate. They (BJP) do their research and the name on which BJP agrees will have out support.” Also Read - Karnataka: Is BJP Planning to End Taluk Panchayat? Congress Questions State's Intention

Noting that NDA was ready for the elections, he added that some parts of Bihar usually suffer from floods in the months of September and October. “We are ready for elections and NDA will form government with two-thirds majority in the state.” Asked how many seats his party would stake its claim over in the election, he said he will take a call once election dates are announced. LJP does not have any MLA in the current Assembly.

Paswan said his party would be starting Bihar Bachao Yatra (Save Bihar Journey). Terming the land bill, over which his party had expressed reservations earlier, a “blessing” for rural India, Paswan said it may be seen initially as “anti-farmer” in the same way economic reforms initiated in 1991 were perceived, but it would be beneficial for farmers.